When I put a passcode on my phone and the two electronic tablets in my house, I thought I had finally outsmarted the technology-obsessed child in our house.

But a recent embarrassing moment made me wonder if I have a little computer hacker in our family.

It has been three years since Gibson first discovered the various mobile devices in our house. At the time, it was cute watching him discover what the swipe of his tiny finger could do. At two-years old, he was barely coordinated enough to turn the device on.

Family members would gather around and giggle with glee as he played innocently with my phone.

At that time, passcodes were an inconvenience to me. That attitude soon changed when Gibson not only learned how to turn the phone on, but also navigate to his favorite applications.

Netflix and an alphabet learning game called “Things That Go” quickly became his favorite go-to apps when he had the tablet in his hands.

He loved watching “Shawn the Sheep” or playing with the Sesame Street learning tools so much that he would grab for the tablets whenever he had the chance.

On a couple of occasions, I caught Gibson sneaking a few tablet moments.

“What are you doing under the blanket Gibson,” I asked.

“Nothing,” he said as I pulled back the cloth.

At first it was easy to put the tablet or phone out of Gibson’s reach. As he grew older and taller, though however,the task grew more difficult.

When I discovered one afternoon that Gibson had figured out how to climb on top of a box he put in one the dining chairs he moved to reach the tablet I had placed high on a bookshelf (that Jack built), I knew it was time to put a passcode on all of our devices.

I admit, watching Gibson discover the new obstacle to his technology fix was humorous.

“What are the numbers Daddy?” Gibson queried.

“I know you know them,” he said as he looked up with a look of consternation.

The new passcodes worked perfectly, or so I thought.

Then my phone alarm went off not once, but many times in the office.

Trying to conduct an interview, I had to reach for my phone every two or three minutes to turn off the alarm. Each alarm sounded differently. First came the “robot” alarm, followed by the “ripples,” “twinkle,” and “stargaze” tunes. After the fifth alert, I looked down on the phone to see that my son had set more than 20 alarms to sound on my phone in the next half hour or so.

Turns out that as much as the passcode prevented him from reaching the applications on my smartphone, Gibson had discovered how to play with and set the alarms. The alarm clock is just one of a handful of features available on the phone without the passcode.

When I returned home that evening and sat down with Gibson on the couch, I showed him my phone and asked, “Have you been playing with my phone,”

After a little prodding Gibson smiled and conceded that enjoyed listening to all of the different alarm tunes.

As much as I wanted to counsel him, I smiled and returned to reading an e-mail on my phone.

As I proceeded to type in the passcode, I saw Gibson’s two eyes trained on my fingers.

“I am watching you,” he said slyly.

Ben Hillyer is the design editor of The Natchez Democrat. He can be reached at 601-445-3540 or by e-mail at ben.hillyer@natchezdemocrat.com. 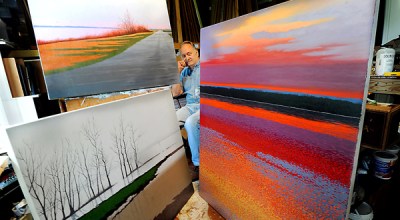 Longwood has fascinating Fourth of July story to tell

My idea of a vacation might just keep me home

Jones sets good example for all of us