NATCHEZ — The Brookhaven Academy tennis team had their hands full when they stepped onto the courts at Duncan Park Wednesday. First, a match with Trinity Episcopal Day School, followed by a clash with Adams County Christian School.

Trinity was able to pull out a 5-4 win in the first match to the delight of head coach Noreen Pyron.

“They’ve come a long way and they played really tough,” she said of her team. “I’m very proud of them.”

Trinity reached out of their classification to take on Brookhaven Academy and Pyron believes in the end it paid off.

“We wanted to play Brookhaven because they are good competition,” she said. “Our district has not been as strong for our players to play, so this is good because of us having to go into south state next week.”

Both No. 2 boys and girls doubles were the matches that stood out to Pyron, with the girls taking a victory and the boys coming up just short.

“The No. 2 girls played probably the best they have all year,” Pyron said. “The No. 2 boys doubles have struggled and I just got them to play this year. Cortez (Adams) has never even played tennis, but (Wednesday), they worked together. They talked and played as a team and they haven’t done that most of the season.”

Pyron said she believes her team is where they need to be heading into south state, which will be at Duncan Park beginning Tuesday morning at 9 a.m.

“We’ve got to peak at the right time,” she said. “We’ll be having practices and have a practice match with Cathedral on Monday, so that will help too.”

ACCS, who is also preparing for the south state tournament, fell short against Brookhaven Academy, 5-4, in what head coach Jimmy Allgood called a ‘hard fought match’.

Allgood said his players were up against tough competition and faced some challenges in the match.

“Brody Cole had a tough day,” Allgood said. “I think his leg was bothering him a big, but back to back days of two hour long matches is hard.

That was a grueling match that he fought and eventually lost in a tie break.”

The Rebels also ran into some trouble in doubles.

“Our No. 1 boys doubles Pete Guedon and Jordan Arnold had a rough outing today,” Allgood said. “They just weren’t on top of their game.”

But there were some positives for ACCS in the match, especially at No. 2 boys doubles.

“John Wallace and Beau Stahlman got their first district win,” Allgood said. “For a sixth and eighth grader, those two young men have come a long way. That was a big win for those two youngsters.”

Heading into south state, Allgood said he believes his team is on the right track. However, they can’t expect to breeze through.

“I think we are where we need to be, but I’m not going to sugar coat it, they’ve got their work cut out for them,” he said. “Hopefully, many will have their mental and athletic capacities ready when we take the court at south state.” 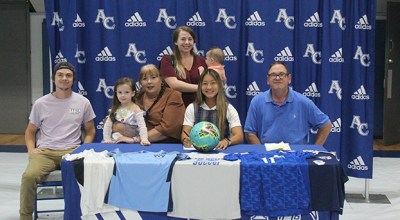 Cooley decides to be closer to home, signs with Co-Lin

Bulldogs have the momentum heading into playoffs