Former Wilkinson County High School star Allenzae Staggers was one of several community college football players trying to reach the prestigious stage of Divsion I football in the Netflix documentary “Last Chance U.”

Now, that goal is in Staggers’ grasp.

In January, Staggers enrolled at the University of Southern Mississippi after spending two seasons at East Mississippi Community College. He stood out in nine games for the Lions last season, catching 37 passes for 477 yards while EMCC was on its way to a MACJC North Division title.

“Man, (Division I) football is everything I expected,” Staggers said. “It’s everything that the hype is about. It’s a big transition from junior college to DI —more meetings, more camps. Fall camp will teach you a lot.”

The six-episode Netflix documentary follows players at EMCC — a junior college powerhouse tucked away in rural Scooba that won three national championships in four years from 2011 to 2014 — as it tries to deliver a fourth title, while showing off their prowess to Division I football scouts. EMCC has produced Division I talents such as Ole Miss quarterback Chad Kelly, 2016 NFL second-round pick and former Alabama defensive lineman Jarran Reed and New England Patriots running back LeGarrette Blount.

Camera crews followed Staggers and the Lions on the field during games, during practice and even at school.

Staggers, who said he has watched the show multiple times, said the experience and exposure changed him and his teammates for the better.

“We were somebody,” Staggers said. “Once it came out, it boosted our level of people knowing us. We have to carry ourselves differently. Most individuals know you now.”

Of course, the cameras were glorious during the good times, but humiliating during the bad.

Staggers said there were times when the crew became a nuisance in downtrodden moments such as EMCC’s loss to Copiah-Lincoln, or even after a rough day of practice.

“There was a point in time where we didn’t want to be bothered with the cameras,” Staggers said. “If coach (Buddy Stephens) was chewing us out, you don’t want cameras on you.”

Now, Staggers is on to his next step as a player. The former outside wide receiver is transitioning to the slot position, which entails a whole new list of responsibilities.

“It was a big transition because I’m reading the defense and making cuts I didn’t have to make as an outside receiver,” Staggers said. “I’m blocking linebackers now, which is something I never did before.”

Staggers will get an authentic dose of Division I football on Sept. 3, as USM opens the season against an SEC opponent in the Kentucky Wildcats.

The former WCHS wideout said the challenge is not something he or his teammates are overthinking. Staggers said the Golden Eagles’ first-year head coach Jay Hopson emphasizes unity — it’s tough to beat an offense or defense of 11 brothers.

“I’m anxious. This is my first time in Division I football and for my first game to be against an SEC team is amazing,” Staggers said. 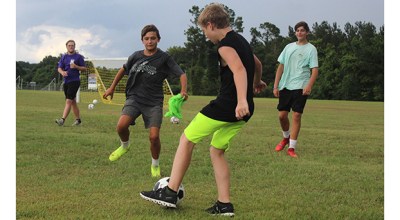 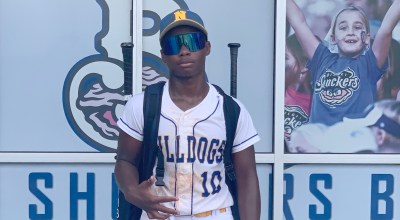 ACCS, Trinity to kick seasons off with jamboree matchup