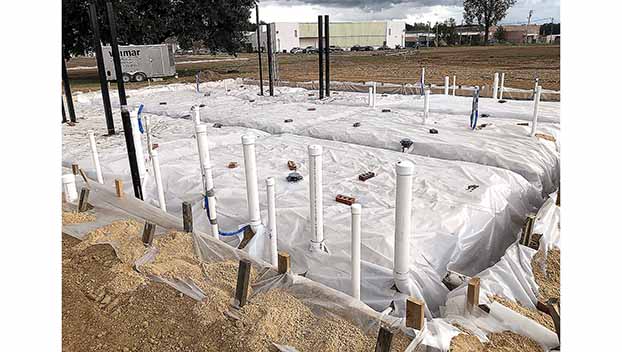 Wilmar Construction crews have started to build the foundation and install the plumbing for the support building of the future public swimming pool near Chester Willis Field and the Adams County safe room. (Ben Hillyer / The Natchez Democrat)

Natchez-Adams Recreation Commission Chair Tate Hobdy said he went by the site on Wednesday and the approximately $1.43 million project looked to be off to a good start.

“The first phase is always the big phase where you see a lot of change, and then it kind of slows down in the next phase,” Hobdy said. “But it looks like it is coming along pretty well.”

“As far as the pool, I have just been waiting on someone to tell me to bring my shovel,” she said. “I thought when they broke ground, we would be out there.”

Natchez Board of Alderman Attorney Bob Latham said he asked the project architect about why a ground breaking was not held, and he was told because a groundbreaking ceremony was held last year.

Officials got together in April 2016 to break ground on the pool. The event was a purely ceremonial effort since the recreation commission did not have finalized construction plans and the project had not been bid out. The city and county ultimately bid out the project earlier this year.

Adams County Board of Supervisors President Mike Lazarus said he also did not see a need for another photo opportunity for leaders.

Lazarus contends he is disappointed with community leaders collectively when it comes to recreation because the money had been available to pursue both the baseball fields and the pool at the same time, but that did not happen.

A baseball and softball complex were on the referendum in 2009 and approved by 78 percent of voters. However, the board of aldermen recently voted to give the bean field site, long proposed for the complex, to the school board to build a high school.

“I don’t know where we are on the ball fields now,” Lazarus said.

Some community leaders — including Arceneaux-Mathis — contend the bean field has enough room for both a complex and the school.

Arceneaux-Mathis said she hopes swimming would start next summer and the Natchez YMCA would be involved. The Metropolitan YMCAs of Mississippi gave the city a deadline of Nov. 1 to have a revised interlocal agreement in place since some disagreement existed about the responsibilities of different parties.

The city is working on the ILA, Arceneaux-Mathis said.

“Once we have got the pool in place, the Y will have so much business to take care of,” she said. “Hopefully everyone will see that things will fall into place once the pool is built.”

The pool has a 200-day build out and assuming enough good weather days, it could be complete by May. Arceneaux-Mathis said she was just prayerful the pool would be ready sometime over the summer.

Natchez YMCA Director Alice Agner said should the YMCA be involved, which she would like to see happen, they would start putting together programs at the beginning of 2018 for the pool. Agner said she would also seek businesses to provide sponsorships for the swim classes.

Mayor Darryl Grennell said moving forward with the pool is good news for the community.

Grennell said he would like to see the pool be used as a tool to provide life-saving skills to people who do not know how to swim, for a recreation opportunity for people who do not have access to a pool and to hopefully host some type of swim competitions.

“People learning life-saving skills was one of my issues even before I became mayor,” Grennell said. “Swimming is something that is essential. For people who really want to learn how to swim, they need to be afforded that opportunity.”