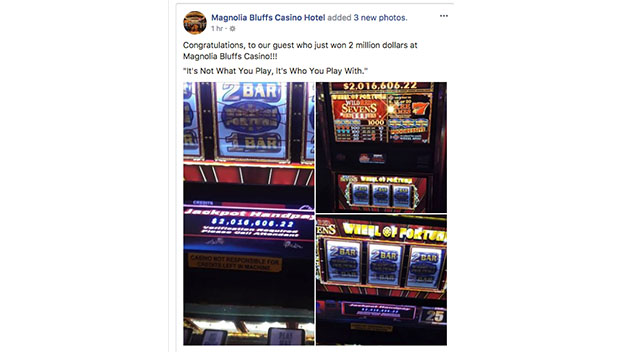 NATCHEZ — Terry Hill was ready to go home for the night, but not doing so changed his life Tuesday.After a couple hours of playing games at the Magnolia Bluffs Casino, the Baton Rouge resident was ready to take his winnings of approximately $800 and call it a day.

But his friends wanted to play a couple more rounds, so Hill sat down at a Wheel of Fortune Wild Sevens progressive slots machine and began playing.

He played $34 from his winnings at the online poker game without getting any luck.

That’s when he hit the jackpot.

Hill said he could not believe what he saw. He grabbed the person next to him and said, “Does that say what I think that says?”

“I don’t even know what I’m going to do with it,” Hill said. “I haven’t even thought that far ahead.”

Hill, president and part-owner of Milton J. Womack, Inc., a contstruction compay in Baton Rouge, and his friends often come to Natchez to duck hunt at a camp he rents in Deer Park, catch up and, of course, play a few rounds at the casino.

Representatives of the Mississippi Gaming Commission came to verify the win, and a representative of IGT Gaming, which manufactures the Wheel of Fortune games drove up from Biloxi came to check the machine, but Hill said he did not mind waiting.

Kevin Preston, president at Magnolia Bluffs Casino, said he was excited for the win.

The casino, located at the bottom of Roth’s Hill Road, has been open since 2012.

Preston said Hill’s was the biggest win he had seen at Magnolia Bluffs.

The Mississippi Gaming Commission had not yet verified the win at the time of publication.