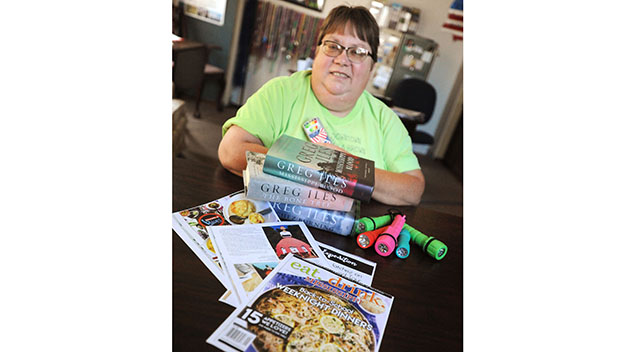 NATCHEZ — For the last five years Karla Brown has made it her job to find a hole and fill it.

Discovering a need for a local shuttle service to regional airports is how her business “Downtown Karla Brown” started five years ago in June.

“When I moved to town from Alaska I asked if there was a shuttle to take people back and forth to the airport.” Brown said.

People told her there wasn’t.

“I asked, ‘Isn’t this a tourist town? How do you go out and get your visitors and bring them in?” Brown said.

Seeing a need, Brown got herself a minivan, a business permit and taxi permit and started her airport shuttle service.

Five years later, Brown is still behind the wheel not only taking people back and forth to the airport, but also introducing them to some of the fascinating people and places on the way.

Hearing from visitors and locals on her travels, Brown noticed that not all tourists were just interested in old houses and stories of long ago.

With a little help from local residents, Brown has developed a series of specific tours that highlight other fascinating aspects of the community.

“My two biggest tours are my ghost tours and the Greg Iles mystery tour,” Brown said.

The tour of six of Brown’s favorite food stops was recently featured in the August/September pages of the regional magazine “Eat. Drink. Mississippi.”

“I even made the front cover,” Brown said pointing to the headline at the top of the page. “Just barely, but I am up there.”

Started a year ago, the Natchez Food Tour begins with a stop for beignets at the Natchez Coffee Company on Franklin Street. From there, Brown takes visitors to Biscuits and Blues on Main Street for a biscuit and small cup of the restaurant’s signature gumbo or crawfish chowder. Other stops on the tour include fried dill pickles at Bowie’s Tavern and barbecue at Pig Out Inn.

Brown said the tour also includes a sample of Fat Mama’s famous tamales and an 8-ounce cup of the restaurant’s Knock-You-Naked Margaritas.

“They usually serve 16 ounces, but I only want my people half naked,” Brown said with a laugh.

The three-hour tour ends with a piece of pie at Mamie’s Cupboard on U.S. 61 South, Brown said.

One year into the tour, Brown said tourists are excited to see and eat from some of the city’s best restaurants.

Even still, Brown said she continues to search for new holes to fill in the tourism and transportation market.

Brown also has started taking the Downtown Karla Brown tour van to Port Gibson to introduce some of the beautiful churches and houses in Claiborne County.

Five years after starting her business, Brown said the venture has been more difficult than she imagined it would be.

“It is not easy, and I am still trying to figure out how to make it work,” Brown said. “I am doing what I love, and I am having fun with it. I love what I do.”