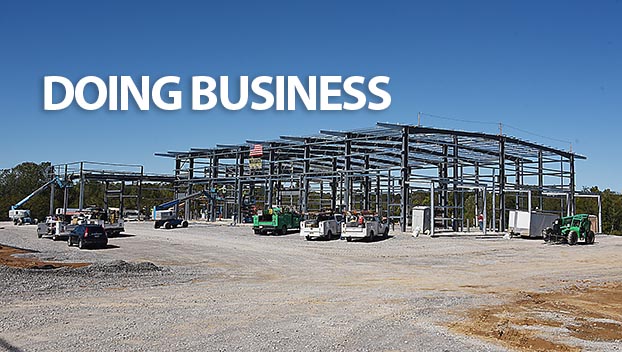 Work is nearing completion on a new Stribling/Empire Facility being constructed on U.S. 61 North. (Ben Hillyer / The Natchez Democrat)

New commercial enterprises start up throughout city, county this year

NATCHEZ — In 2019, Natchez has seen several new businesses pop up across the area.

In the downtown area alone, new businesses that have opened in recent months include:

Local economic development officials said they believe the surge in local businesses opening in downtown is a reflection of recent downtown revitalization efforts.

“It has been refreshing to see some of the spaces have been renovated and occupied and see them become vibrant businesses that are out there,” said Chandler Russ, executive director of Natchez, Inc. “Downtown is a gateway to our community in general, and the ability to have those available spaces that citizens and entrepreneurs are able to occupy and start their businesses or expand and grow their businesses is truly of value.”

Arthena Mazique, who works at Natchez Midtown Grill, which opened in September, said business has been good at the restaurant located on the corner of Franklin and Martin Luther King Jr. streets.

“It is going good,” Mazique said. “It is steady at the moment. We love being in this area. It is a chance to meet new people and give them the experience of tasting our food.”

The new businesses comprise a revitalization of the triangle area at Martin Luther King Jr. and Franklin streets, said Chesney Doyle of FOR Natchez, which completed a downtown master plan last year, and Doyle said the revitalization fits in with the master plan’s vision.

Russ said Natchez, Inc. recently held its “Possibilities Tour” in which several available downtown properties are opened for tours to people who may be interested in renovating them for businesses in downtown Natchez.

“I think we had six properties on tour,” Russ said “… We ended up with about 60 people who came through and registered at Natchez, Inc.”

Russ said some of the new businesses in downtown are the result of previous Possibilities Tours that promote downtown as a business development opportunity for entrepreneurs and people interested in real estate.

“In the Possibilities Tours, we have featured about 25 separate properties with 12 of them being occupied and or renovated now,” Russ said. “It has been a nice addition to the downtown and something that we hope to see continue and continued growth at some of the existing spaces that are down there.”

Recent business development growth in Natchez has not been limited to just downtown Natchez, however.

Other new businesses or rebranded businesses in Natchez in recent months include:

Russ said a further announcement about the facility that has been under construction would be made soon.

“We are excited about seeing the continued construction of the Stribling (Stribling/Empire Facility) out on 61 north, which is millions of dollars worth of investment, both the building as well as the equipment that will go in there to service the products that they plan on doing, and it will be a huge,” Russ said. “It will add additional jobs out at that facility — well-paying jobs, too.”

Another project under development is the remodeling of the former Ruby Tuesday building on Seargent S. Prentiss Drive, Russ said.

“The guys at Roux 61 are doing the renovation and modernization of Ruby Tuesday space, and it is coming along,” Russ said.

No further details are yet available on the plans for the old Ruby Tuesday location.

Russ said the recent increase in new businesses is an indication that some of the area’s economic development efforts are paying off.

“Some of the manufacturing base in general across the board right now are having significant expansions so local economy-wise, we are seeing things settle in and seeing somewhat of an uptick in our local economy as a whole,” Russ said.

Russ said it is particularly encouraging to see a national brand such as Planet Fitness move into the area and said he views that as a combination of Planet Fitness wanting to grow in the region and the Natchez Mall willing to work with the franchise to retrofit a location for them in the Mall.

“I think we are eating through the oil downturn, so we are starting to see the economy go back in a positive direction over the last year or so,” Russ said. “As that manufacturing base in the region continues to hire and bring in people you’re seeing some of that trickle into the local economy and there are some more dollars in the local economy now than maybe two years ago given the stability and the manufacturing sector. We are also seeing oil trickle back up.”

Krewe of Phoenix Parade heats up crowds on cold night