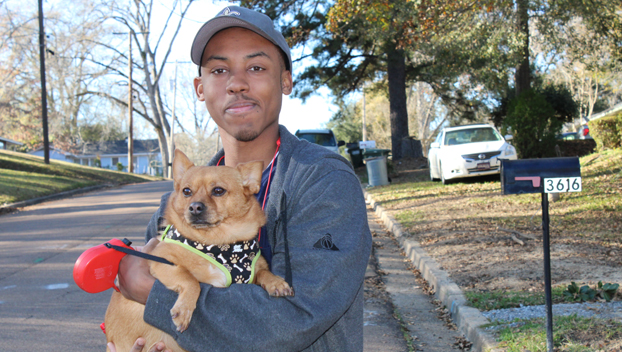 NATCHEZ — Dallin Blanks said out of the three pets he and his mother, Annette Tyler, own, a dog named Teddy is his favorite.

When The Dart landed near Blanks’ house on Peachtree Drive on Thursday afternoon, Blanks was about to take Teddy for a walk.

Before moving to Natchez approximately eight to 10 years ago, Blanks said he and his mom, who is a science teacher, lived in Texas.

“Anything that she (Tyler) does, I’m not too far behind her,” Blanks said, adding they have owned Teddy for approximately four years now.

“We [my mom and I] got him in Jackson from Catrina Early, one of my mom’s friends,” Blanks said. “Early was about to give him away because she couldn’t take care of him.”

Blanks’ love for pets has multiplied by two now that he also owns a dog named Dutches and a cat named Tinky.

Teddy, however, is his favorite, Blanks said, even though Teddy doesn’t know many tricks. The best he could do is fetch, Blanks said. On the other hand, Blanks said Dutches has been to obedience school and can sit and fetch.

Blanks is a 2018 graduate of Cathedral High School and is studying Graphic Design at the University of Southern Mississippi. Blanks said coming home to see Teddy was the best thing about his Christmas break.