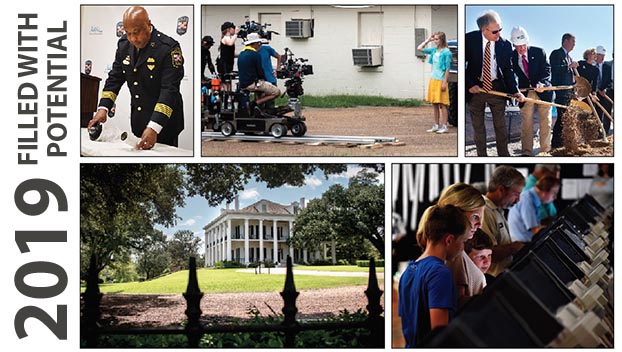 NATCHEZ — The Miss-Lou experienced a year filled with promise and potential in 2019.

From the emergence of a new industry and the hope for the future for one of Natchez’s most significant landmarks to big changes in county government and new efforts toward making the community safer, the region witnessed new developments in nearly every corner of the community.

After the year 2018 that was marred by 12 murders in the city limits, local law enforcement took action to curb violent crime in the region in 2019.

“Let me be clear, if you violate federal law, we will arrest you immediately, we will move to detain you until your trial,” Hurst said in February. “You’re not going to get a deal that lets you out in just a couple of months. You will serve time in the federal system without parole.”

In addition to Project EJECT, the city continued to partner with Project NOLA to install high definition cameras — some with gunshot detection capabilities — in the city’s high-crime areas. In August, the city had installed 25 cameras in addition to 92 cameras purchased and installed by the Natchez Housing Authority.

In August, Police Chief Walter Armstrong said that the area’s new crime initiatives were having a positive effect on the area’s crime rate in 2019. The city has seen three murders in 2019, the latest being a Dec. 20 stabbing death on Oak Hill Drive.

In addition to a significant drop in murder cases, the city has also seen a decline in other crimes, including burglary, robbery and battery cases Armstrong said.

The 2019 election set the stage for significant change in Adams County government.

In the City of Natchez, Mayor Darryl Grennell announced he would not be seeking reelection, opening the door for new city leadership in 2020.

In March, Riverland Medical Center officials celebrated the groundbreaking of a new $36 million hospital to be located on U.S. 84 between Ferriday and Vidalia.

Construction of the 61,000 square-foot Concordia Parish hospital and 17,000 square-foot medical office building continued through the year and is expected to be finished in 2020.

When completed, the hospital will be renamed Trinity Medical.

The project is being funded by the United States Department of Agriculture, new market tax credits, the State of Louisiana and local bank financing. Last year, USDA approved a loan application of $30 million to build the new facility.

One of New Orleans’ largest hotel owners announced the purchase of the landmark Natchez mansion Dunleith. The J Collection announced the acquisition in November, after a year of ups and downs for the Natchez property.

United Mississippi Bank took possession of the historic mansion and restaurant after it foreclosed on the property in 2019, one year after Louisiana businessman Michael Allen Worley filed personal bankruptcy in January 2018, citing more than $107 million in debt, with just more than $80 million in assets.

In April 2019, UMB announced the property was under contract with Louisiana film producer Jake Seal. Three months later, Seal backed out of the deal, citing health-related issues with the family.

J Collection, which represents 18 locally-owned and operated hotels in New Orleans and southeast Louisiana, plans to reopen Dunleith as an inn, restaurant, event venue and conference center, following restoration and repair of some aspects of the property.

The Adams County Correctional Center faced closure earlier this year when it lost a federal contract to house prisoners. The private-run prison’s future was saved by a new contract with U.S. Immigrations Customs Enforcement that had been secured in September and promised both job retention and the creation of 50 new jobs at the facility. Adams County would also receive revenue that fluctuates based on the number of inmates housed at the facility — at 50 cents per inmate per day — and approximately $2 million in taxes collected annually.

In March, legislators passed a new Mississippi film tax credit law that allows for a 25 percent rebate on cast and crew members’ salaries up to $5 million in payroll and fringe benefits paid to out-of-state nonresidents.

The new law is a boost to the film industry in Natchez and the surrounding region, where film director Tate Taylor and his partner film producer John Norris live.

This summer, Taylor and Norris filmed the movie “Breaking News in Yuba County” in Natchez. The film starring Allison Janney, Mila Kunis and Juliette Lewis is slated to be released in 2020. The movie is one of several planned for the area thanks to the tax credits.

In July, a non-profit organization called Film Natchez was established to foster the local film industry by helping to create training programs for local workers and by securing future film productions.

In November, Natchez-Adams School District officials announced a partnership with Film Natchez to provide education and training opportunities at the Fallin Career and Technology Center.

Existing industries like Great River and Stribling Equipment expanded their operations to create more jobs and provide a broader range of services.

Other new businesses that have newly opened or rebranded in 2019 include El Taco Loco on John R. Junkin Drive; Lil Italia, which is in the former Lil Dago’s Café on Seargent S. Prentiss Drive; Alberto’s Taqueria on Lower Woodville Road and Planet Fitness in the Natchez Mall.

The Mississippi Department of Archives and History unveiled plans for a new museum and other improvements of state properties in and around Natchez.

In April, MDAH Director Katie Blount announced plans to build an expanded museum with state-of-the-art exhibits and a new large outdoor pavilion at the Grand Village of the Natchez Indians on Jefferson Davis Boulevard. The new building is part of MDAH’s intent to make the Grand Village “the very best Native American site it can be,” Blount said.

In July, MDAH closed Historic Jefferson College for daily visitors but kept the property available for special events. Even still, Blount said MDAH is making future plans to make the property “a gateway to Natchez” visitors traveling to the region.

Krewe of Phoenix Parade heats up crowds on cold night