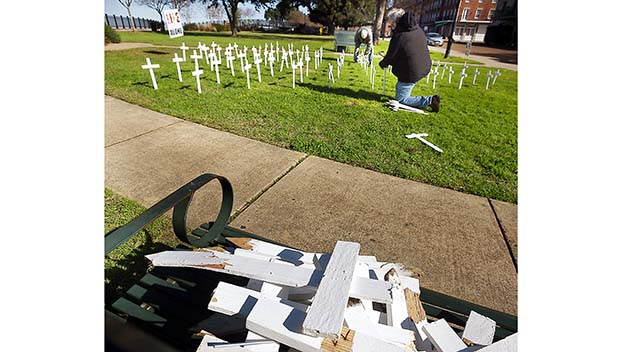 Broken crosses sit in a pile as Steve Nielsen and Tommy Biglane from the Knights of Columbus work to restore the cross display in front of the Natchez bandstand Monday morning. (Ben Hillyer / The Natchez Democrat)

NATCHEZ — Approximately 20 of 98 crosses that were placed Sunday afternoon on the Natchez Bluff were reduced to splinters by Monday morning, said Ruth Powers of Caring Hearts Pregnancy Resource Center — a Pro-Life organization that supports women through unplanned pregnancies.

The crosses were placed by Saint Mary Basilica Catholic Youth Organization and the Knights of Columbus men’s ministry to mark Wednesday’s 47th anniversary of the U.S. Supreme Court’s Roe vs. Wade decision.

The 98 crosses represent 98 children who are aborted every hour in the United States, Powers said.

“Someone came through — I’m not sure when — and tore up a couple of our signs and tore down about 20 of our crosses,” Powers said. “They didn’t just knock them down but literally broke them into pieces.”

Powers said friends who were walking on the bluff noticed the broken crosses around the gazebo before 9 a.m. Monday and contacted her.

The crosses were replaced by the local chapter of the Knights of Columbus Catholic men’s organization by Monday afternoon, Powers said, adding that wasn’t the first time a similar incident had occurred.

“We had extra, so they just came out and replaced them fairly quickly,” Powers said. “This isn’t the first time something like this has happened and it always makes me angry and sad when it does happen. Why can’t we just choose to disagree without resorting to this kind of behavior?”

The church and organizations received a permit from the City of Natchez to place crosses on public property, Powers said, and destroying the crosses would be an act of vandalism even though the crosses themselves are inexpensive.

“The monetary value of what was done probably would not rise to the level of something prosecutable, but if we ever find out who did it and that there are steps that can be taken we will take them,” she said.

Steve Nielson, head of the Natchez chapter of the Knights of Columbus, contacted local law enforcement about the vandalism Monday morning, Powers said.

The remaining crosses will be taken down this Sunday after a prayer vigil that will take place 5 p.m. Wednesday at the gazebo, led by Father Scott Thomas from St. Mary Basilica, Rev. Bo Swilley from Community Chapel Church of God, Pastor Paul Southerland from Highland Baptist Church and Pastor Rajesh Behara, Associate Pastor at Parkway Baptist Church. In the event of inclement weather, the vigil will be moved to the Natchez Grand Hotel, Powers said.

Swilley said the purpose of the vigil isn’t to protest, but to pray.

“The purpose is prayer,” Swilley said. “We’re there to pray for the unborn and for women who’ve made the decision to abort their children, that they’ll understand that there is forgiveness for everything. I pray that those who are pregnant and are thinking about abortion realize that there are other options.”

Swilley said people seem to resort to violence more frequently when faced with controversial issues they disagree on.

“I believe it’s a sign of the times, where some people can’t stand the idea that others believe differently,” Swilley said. “We used to have conversations about things that we disagree on, but we are losing that ability. Nowadays it seems like people can’t disagree without being ugly to each other. … I want everyone to come to the knowledge of Christ and understand what that cross represents. That cross is not hate. That cross is love.”

Christ Church’s oldest member sees many changes over the years

Judge: No raises for public defenders

Suspect on the run from October 2019 incident arrested