Cathedral fails to execute against Brookhaven 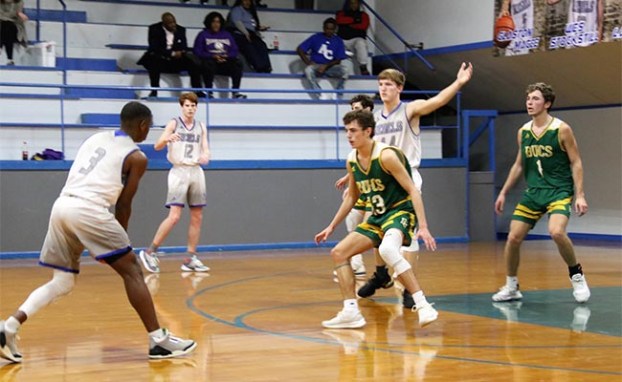 Credit led ACCS with a season-high 24 points while Granger and Stockstill each finished with 15 points. Austin Blanton provided some key scoring near the basket as he contributed with 10 points.

“Obviously, it was a big win for us,” Rebels head coach Matthew Freeman said. “Our kids never gave up. We got down nine in the second half and came back to force overtime.”

Actually, ACCS was down 11 points, 43-32, at the end of the third quarter. The Rebels outscored Bowling Green 21-10 in the final eight of minutes of regulation to keep the game going.

Both teams scored 12 points in the first overtime period before the Rebels outscored the Buccaneers 10-6 in the second overtime to escape with the win.

“Josh, Wes, and Vic Lassiter played tremendous defense — hustling, getting some steals, and getting big stops. Josh hit two 3’s that were big-time shots. Austin and JD played really well for us in the post, rebounding and scoring,” Freeman said.

Freeman noted that the pace of this game was much faster against Bowling Green than it was when ACCS defeated Centreville Academy 29-19 Monday night.

“This was a very fast-paced game. The previous game was like a softball game,” Freeman said. In the Rebels win over the Tigers, Centreville tried to stall the game a couple of times by keeping the ball in its possession for about a minute and a half.

As for the two overtimes sessions, Freeman said, “We were down in the first overtime and came back to tie it. In the second overtime, we got up one and they tried to take the lead on us. We stopped them and they fouled us. Vic Lassiter knocked down two free throws with four seconds left.”

ACCS (9-7) returns to MAIS District 4-4A action Friday when it travels to Clinton, Louisiana, to take on Silliman Institute at 7:30 p.m. Friday.

ACCS found itself trailing Bowling Green after a rough first quarter 18-3. The Lady Rebels would not go away quickly, however, as they outscored the Lady Buccaneers 10-1 in the second quarter going into halftime down just six points, 19-13.

Unfortunately, the Lady Rebels could not keep the momentum going in the third quarter as they scored just six points while the Lady Buccaneers put up 15 points for a 34-19 advantage.

Despite the loss, ACCS got a combined five 3-pointers from Geri Brumfield and Drue Boyd. Brumfield knocked down three shots from long distance and led the Lady Rebels with 11 points. Boyd connected on a pair of 3s and finished with six points. Maliyah Ford added eight points and Halle Peterman chipped in with seven points.

The Lady Rebels (2-14) next play at Silliman Institute Friday at 6 p.m.