Natchez High School to be closed Friday due to… 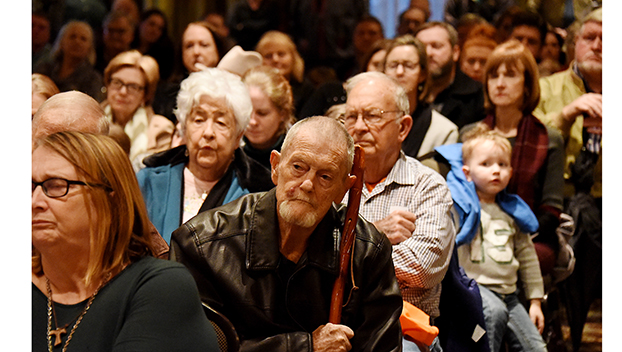 NATCHEZ — On Wednesday, the 47th anniversary of the legalization of abortion in the United States, churches and community members from around the Miss-Lou gathered in the Natchez Grand Hotel to pray for the unborn, their mothers and for those in Washington D.C. with the power to reverse the decision.

While Miss-Lou community prayed from home, Cathedral students flew to Washington, D.C., for the National March For Life rally and will today march on Capitol Hill with thousands of Pro-Life advocates from across the nation.

Instead of preaching about abortion, powers said the purpose of Wednesday’s vigil is to pray.

During the vigil, 98 small crosses on the Natchez bluff represented 98 abortions that occur every hour nationwide. When Natchez began hosting a Pro-Life vigil 10 years ago, the number was 143 abortions per hour, Powers said.

During the vigil, Powers also recognized the late Virginia O’Beirne, who died July 26 at 90 years old and was a chairman of Caring Hearts.

“She was not just a colleague, but also a good friend of mine and I miss her greatly even today,” Powers said. “Losing her was a loss to the entire Pro-Life community in Natchez, but it’s up to us to carry on her work in her memory because she lived for this cause. Literally, her last words were ‘I hope the pregnancy center continues.’”

Powers said volunteers and monetary contributions to Caring Hearts are needed to make sure the center stays operational.

The center assists women of any age with unplanned pregnancies through financial difficulties and helps them navigate the paperwork through various agencies that can help, Powers said.

“We don’t want any woman to have an abortion thinking she cannot take care of her child. … We provide help to women in one way or another up until a child is 18 months old, so don’t let anyone tell you that all we care about is the unborn,” Powers said.

Those interested in supporting Caring Hearts Pregnancy Resource Center may call St. Mary Basilica at 601-445-5616 and ask for Ruth Powers.