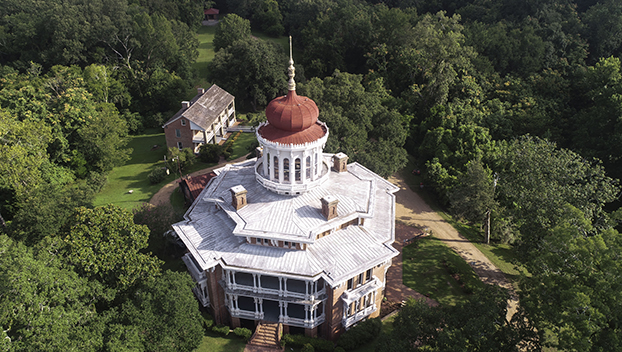 Special to the Democrat

NATCHEZ — The Pilgrimage Garden Club is marking an important 50th anniversary this month. It acquired Longwood on Jan. 26, 1970, when the McAdams Foundation donated the historic Natchez mansion to the club.

Kelly and Ina May McAdams of Austin, Texas, had purchased the 90-acre estate in 1968 from the descendants of Haller Nutt. He was the wealthy cotton planter who had the house built in 1860-61 but left unfinished after losing his fortune during the Civil War.

The McAdams, through their foundation, gave the mansion, its furnishings and 4.4 acres to the Pilgrimage Garden Club. They sold the rest of acreage to the club later in 1970. In deeding the property to the PGC, the McAdams considered the club the best group to preserve Longwood in its unfinished state as the largest octagonal mansion in the United States.

After taking ownership 50 years ago, the PGC appointed a committee headed by Natchez physician Homer Whittington to assess what needed to be done for Longwood’s restoration, according to William Whitwell, author of the book “The Heritage of Longwood.”

The roof and gutters were especially deteriorated. Leaks had heavily damaged the inside timber. Longwood’s old barn was torn down, yielding wood needed for replacing the mansion’s rotted timber. Pilasters on the top domed cupola were rebuilt. Mansion galleries and columns had rotted or fallen due to decay. A start was made to replace them.

In preparing for the February 1971 dedication of Longwood’s status as a National Historic Landmark, restoring the mansion’s front porch was made a high priority by the club.

Sears provided free paint and sent an expert from Chicago to give advice on painting Longwood. The club contracted painters to scrape off original paint and paint anew. Some verandas, balcony balustrades and columns were actually bare of paint when technicians arrived in 1971 to inspect Longwood. As renovations continued in 1973, a restoration expert recommended the aluminum silver paint on Longwood’s iconic onion-shaped dome be painted reddish tan.

Prior to the McAdams’ 1970 donation, Ina May McAdams discussed the family’s intentions to give Longwood to the National Park Service. In an October 1969 letter, Ina May said the McAdams thought the NPS was best suited to “keep (Longwood) maintained for posterity.” However, if the NPS “will not take it, we will search for some other worthy entity — for we have dedicated ourselves to seeing that Longwood becomes and remains a national shrine.”

The McAdams sold the rest of the property (about 82 acres) to the PGC on Aug. 1, 1970. In a May 1970 letter, Kelly McAdams said his family wanted to sell the land to the PGC because “the women of Natchez, and the Pilgrimage Garden Club in particular, should have control of this entire property.”

McAdams urged the garden club to buy the land. Otherwise, he said, his children would push to sell it for possibly more money to anyone who would “develop it as they wish.” McAdams evidently did not want the land commercially developed because “we share the desire of the (PGC) women that no subdivision be put there which will detract from Longwood.”

For the 50 years since the Pilgrimage Garden Club acquired Longwood, it has kept the architectural marvel preserved and has shared its history for the thousands of visitors who tour the National Historic Landmark.

Primary sources for this are books written by William Whitwell (“The Heritage of Longwood”) and Ina May McAdams (“The Building of Longwood”). Documents in Longwood’s archives were also used.