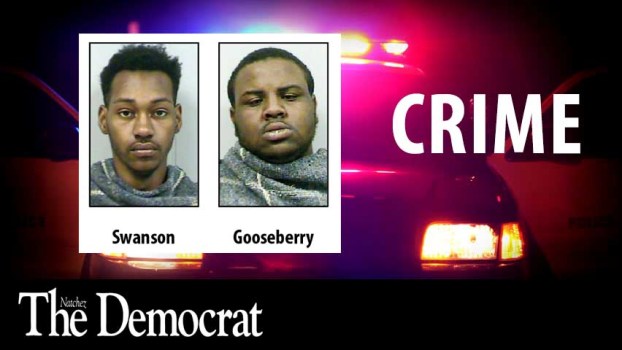 NATCHEZ — Natchez police officers said they have arrested two men they believe were involved in approximately 20 auto burglaries that have occurred in the city between Jan. 16 and 23.

Police arrested Tyran Gooseberry, 19, of Dallas, Texas, and Terrionte Swanson, 19, of Natchez on Jan. 21 and both face charges of burglary of a motor vehicle, a police report states.

Gooseberry has a bond of $25,000 and has since bonded out of jail. Swanson also has a bond of $25,000 but is still being held in jail and the Mississippi Department of Corrections has been notified because he is on post-release supervision on a prior aggravated assault plea arrangement, Natchez Police Chief Walter Armstrong said.

On Nov. 4, 2018, Terrionte Swanson was arrested and charged with five counts of vehicle burglary and one count of attempted murder where he shot his co-conspirator in the back of the head, Armstrong said.

“During the court hearings on Aug. 28, 2019, Terrionte Swanson agreed to enter a plea of guilty to a lesser included offense of aggravated assault,” Armstrong said. “The court sentenced Terrionte Swanson to serve 10 years in the Mississippi Department of Corrections, with full credit for all time served, and the remaining balance suspended, to be served on formal reporting post-release supervision for a period of three years through MDOC.”

Armstrong said investigators believe other individuals were involved in the recent auto burglaries.

“We are working on identifying those subjects,” Armstrong said. “We believe these individuals are involved in burglaries across the river.”

In nine of the approximately 20 car burglaries nothing appeared to have been taken, Armstrong said.

“It was only discovered by the disarray of items in the vehicles,” Armstrong said. “In the other 11 of the car burglaries approximately 10 guns were stolen ranging from a handgun to a hunting rifle. There was also an undisclosed amount of cash. Approximately 17 of the vehicles that were burglarized the vehicles were left unlocked.”

Armstrong said police have video of several of the auto burglaries.

“We are continuing to ask for any additional home surveillance systems that may have caught anything suspicious to please contact the police department (601-445-5565),” Armstrong said.

Christ Church’s oldest member sees many changes over the years

Judge: No raises for public defenders

Suspect on the run from October 2019 incident arrested