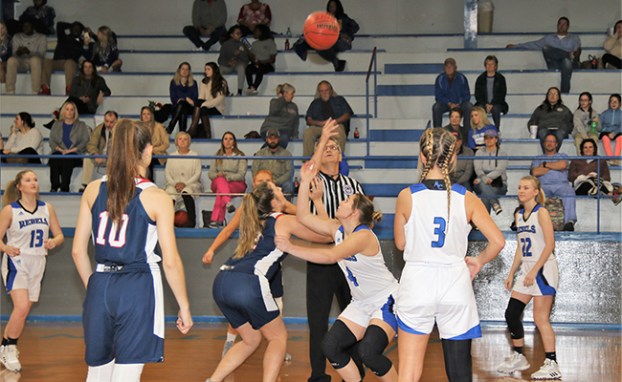 NATCHEZ —The Adams County Christian School Rebels sent their boys basketball seniors away happy on Senior Night with an 82-25 victory over the Amite School Center Rebels on Thursday night.

Vic Lassiter, one of five seniors on the Rebels boys’ basketball roster, scored 30 points in the game.  Matthew Freeman, ACCS Rebels head basketball coach, said Lassiter dedicated the special night to his mother Cortina Holt-Lassiter, who passed away in May 2013.

“He played as best as he could last night,” Freeman said. “Vic gave all of the credit to his mom being with him.”

“With it being Senior Night, all of the seniors were excited to be out there playing together,” Freeman said. “It was a good game for us to build confidence into our game against Oak Forest Academy.”

ACCS will play their final Midsouth Association of Independent Schools Class 4A Division II South game on the road against Oak Forest Academy at 7 p.m. Tuesday. The other district game was played on Jan. 31 against Brookhaven Academy. Freeman said Tuesday is a must win district game against Oak Forest Academy. To prepare for the game on Tuesday night Freeman said the Rebels need to focus on defense, preferably boxing out and rebounding.

“Right now, we’re giving up too many easy baskets,” Freeman said. “It doesn’t matter how many points we score, if we’re giving up easy buckets. We have to work equally hard on the defensive end as we do on the offensive end.”

NATCHEZ — Adams County Christian Lady Rebels came up short on their Senior Night on Thursday and were defeated 35-31 by Amite School Center Rebels.

The three ACCS Rebels seniors who played in the game were Geri Brumfield, Cassi Haydel and Sarah Smith. Brumfield was the only senior who scored in the game. She led ACCS with 15 points and shot four 3-pointers in the game. Halle Peterman and Maliyah Ford each scored seven points.

A 15-point outburst in the second quarter by ASC Rebels was enough to sink the ACCS Rebels chances in winning the game. Amite School Center kept scored eight points in both the third and fourth quarter. The Lady ACCS Rebels tried to come back with 10 points scored in the fourth quarter but it was not enough to win the game.

The last MAIS Class 4A South game is on the road at 6 p.m. Tuesday against Oak Forest Academy.