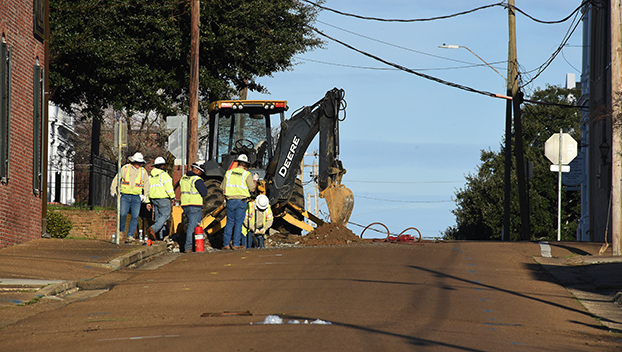 Atmos Energy crews work on a gas leak near the intersection of State and Commerce streets Monday morning. (Ben Hillyer / The Natchez Democrat)

Crews to work through night to restore gas service after leak

NATCHEZ — A gas leak at State and Commerce streets forced the evacuation of three or four houses in the 500 block of State Street at approximately 6 a.m. Monday, officials said.

Adams County Director of Emergency Services Robert Bradford said the evacuation was a precautionary measure due to the strong odor of natural gas.

Atmos workers spent most of the morning locating the source of the leak, which was a bad gas line, Bradford said.

Atmos officials, Bradford said, hired a contractor from Yazoo City to come to Natchez on Monday afternoon to drill and bore the old pipe out so they can lay a new pipe in.

“There are some residents over there and some businesses that are going to probably be without gas for (Monday night),” Bradford said. “They are going to work through the night trying to get everything restored. The leak has been cut off.”

Bradford said the residents were able to go back home after noon on Monday but that Atmos was offering to make provisions for them to stay elsewhere through the night if they wanted because they would be without gas.

“Atmos is trying to take care of the customers,” Bradford said, adding he believes the gas line work would be completed by Tuesday morning. “They are going to work through the night to try to get everything restored.”

Bradford said Atmos officials told him they believed the pipes were just old and needed to be replaced.