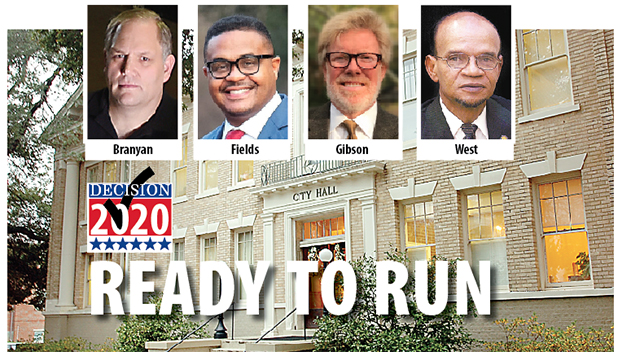 Election 2020: Mayoral candidates explain why you should vote for them

NATCHEZ — A last-minute surprise Friday transformed the mayoral race from a three-man race to a four-man race when former Natchez Mayor Phillip West threw his hat into the ring as an independent candidate just before the 5 p.m. filing deadline Friday.

Democrats Tony Fields and Dan Gibson will square off in the April 7 mayoral Democratic primary and the winner will face independents Richard Branyan and West in the June 2 general election to fill the seat being vacated by Natchez Mayor Darryl Grennell who chose not to seek a second term.

All incumbent aldermen filed for reelection as Democrats and three of the six races garnered challengers, those in Ward 1, Ward 4 and Ward 6.

Ward 2 Alderman Billie Joe Frazier, Ward 3 Alderwoman Sarah Carter-Smith and Ward 5 Alderman Ben Davis, all Democrats, are running unopposed and by default will serve another term on the board.

Incumbent Municipal Court Judge Lisa Jordan Dale did not garner any opposition so she also will serve another term.

Below we interviewed the four mayoral candidates about their positions on the issues.

All four mayoral candidates said jobs and economic development are top priorities in the race. How the candidates would address those issues, however, varies.

Fields said Natchez should view the bigger picture when it comes to recruiting economic development.

“I know we were looking to make that big homerun and get that great big industry here that is going to hire hundreds of people, but I think we need to focus on making some base hits,” Fields said. “If we can get some companies to come in that will hire 20 people with good paying jobs, or 30 people, and just start stacking those and bringing those in I think we’ll start making progress.”

Fields also said he supports the Film Natchez organization and believes the film industry could be good for Natchez.

“I think we really need to go all in on the film industry and make Film Natchez and that group be to Natchez what I envision Tyler Perry is to Atlanta,” Fields said. “I think we could be that kind of entity in Mississippi.”

Branyan said he believes Natchez needs to work harder on promoting tourism to bring people back to downtown and revitalize businesses in order to improve the economy.

“There are a number of things I believe we can do to make downtown a much stronger and much more vibrant place,” Branyan said. “We have everything a successful downtown needs apart from we don’t have people coming to Natchez. We have on trend things like the brewpub, the distillery. We have great restaurants. We have a few good bars. … We are missing a lot of people who are coming to Mississippi, doing the Blues Trail that we are not catering to. There are a lot of basic things we can do. There are people who want to invest in downtown but are not going to invest in downtown until we can get people here.”

West said he believes the mayor should be more involved in economic development efforts.

“The mayor should be more involved in trying to sell the community to entice economic development,” West said. “We have an organization I think has done a relatively good job in recent years, far better than what had happened in the 10 or 15 or 20 pervious years, but you need to have the community involved and the mayor is basically an ambassador for the community.”

Gibson said he believes improving the city’s economic outlook would solve other problems including crime.

“Jobs is definitely the No. 1 issue, and the reason I say jobs is the No. 1 issue is it impacts every other issue,” Gibson said. “We have an issue with crime. We have an issue with people in Natchez feeling unsafe and I will not rest until every citizen in Natchez feels safe regardless of where they live. The only way to make Natchez safe again is to have opportunity. When people have jobs, they are less likely to get in trouble and in fact jobs can completely turn a family from dysfunctional to functional.”

Gibson said he funded a police force and bought a K9 officer when he was mayor of Crystal Springs 25 years ago.

“That dog was put to good use in helping rid our streets and our schools of drugs,” Gibson said. “I also believe that we need exactly what the city is starting to do — more cameras. In addition to more cameras in our city we need better lighting because crime actually flourishes in those areas without light.”

“We have made some improvements as far as violent crime is concerned but there is more work to be done there,” Field said. “I like the progress that we have made but we need to make a very concerted effort to get these illegal guns out of the hands of young people.”

Branyan said he believes tourism is a vital component of Natchez’s economy.

“Because I’ve had a business (Lower Lodge Antiques) downtown for 30 years I really know what is wrong with downtown,” Branyan said, “what is wrong with the promotion of Natchez, what we can do to fix it. I have a lot of ideas and ways of changing the way we do promotions in Natchez and I want to do a lot more public private partnerships. … One of the things that has been a problem in Natchez is no one can get one calendar of events together that everyone agrees on. … the right leadership can get everyone to work together.”

Fields also said he believes Natchez should change its means of tourism promotion.

“We have always been talking about what we can bring to Natchez, but I think we need to focus on what we have currently and build on that,” Fields said. “We need to make sure the events and everything that we offer are diverse. We need to make Natchez the premiere destination of Mississippi and I think we do that by first improving our own quality of life, whereas people say, ‘Hey we want to see what’s going on in Natchez.’ We want them to really come to Natchez and us not be just one-dimensional. We have to be diverse in everything that we do.”

West said he believes tourism is important to Natchez’s economy.

“Tourism is a part of our economic development,” West said, “but it can’t be viewed as being all we want is tourism because our poverty rate has constantly remained at a high level. It has gone up year after year and in recent years it has gone up even higher because of the loss of jobs that we have had in this community. That cannot be addressed simply through tourism because many of the jobs are not high-paying jobs. The people that own the businesses may make money and it is a vital part of our community, and it should be upgraded the best that we can do but at the same time we have to understand that having access to better opportunities and high-paying quality jobs in our community is going to be something that we cannot do without as a foundation if we expect to be able to move forward with a better quality of life.”

Branyan said he believes he is the best candidate to be the next mayor of Natchez because he’s had a business downtown for 30 years.

“I think we need a businessman to be mayor and someone who really knows the city, has been here a long time and knows in depth the problems and history of what we’ve had in Natchez and what we need in Natchez,” Branyan said. “Until we get more people downtown, we can’t get anymore development downtown.”

Brayan said he believes Natchez could do better.

“There are just a ton of things we can do better and we should be doing better,” Branyan said. “We need someone in the mayor’s office who is going to work hard, who is going to be passionate about the city and really want to get the job done and work to bring the town together, the people together, all work together and use that imagery to bring people back to Natchez and downtown, and I truly believe that we can do that.”

Fields said his love of Natchez and past experience as Ward 4 Alderman from 2008-2016 make him the best candidate to be Natchez’s next mayor.

“Voters should choose me because of my loyalty to Natchez, my upbringing here and my history of leadership in Natchez,” Fields said. “I’ve shown leadership. I have experience. I’m accountable, and I’m very professional.”

“I have that experience and I can go in and hit the ground running,” Fields said. “Nobody in Natchez has to do any guesswork on me. I have been here all my life, working in the community. I have a great record in our school system as far as school improvement is concerned. I have been a leader here and I just want to do my part. I can’t just sit on the sidelines and complain about what’s happening. I have to be an agent of change and get in the game. Those are the reasons why people should vote for me.”

Gibson said voters should elect him the next mayor of Natchez, because he has the experience to do the job.

Gibson said as mayor of Crystal Springs he balanced the budget.

“In addition to that, I’m the only candidate in the primary that has ever written and implemented a long-range plan for city government,” Gibson said. “I want to see us as one Natchez, because we all suffer when there is no opportunity but — regardless of where we live, where we worship, the color of our skin, where we work, where we go to school — we all will flourish when opportunity comes back to Natchez.”

West said he is running in case he is not happy with the candidate who emerges from the primary.

“I’m in the race hopefully, temporarily,” West said. “I want to be able to see who comes out of the primary and what they are offering.”

West said he would drop out if he were satisfied with the winner of the primary.

“If in fact a good person with good ideas and ways to back up those ideas emerges during the course of the campaign then Phillip West is out,” West said. “I’m withdrawing.”

Otherwise, West said no other candidate is as qualified as he is.

“There is nobody in the race who has the breadth of experience in government and in the community so forth and so on that I do,” West said. “I’m just dedicated to hopefully helping to motivate a more fruitful discussion among those persons who are seeking the position and hopefully somebody will emerge to where I can feel confident in saying you don’t have to consider me.”

Natchez votes today for Mayor, aldermen in Wards 1 and 4

Mississippi man admits to being moonshiner, feds say he owes $1.2 million in state and federal taxes

Coroner: DNA collected from remains found in boot, optimistic ID will be made