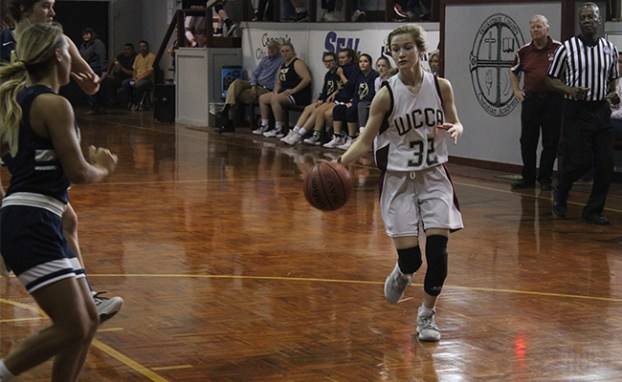 MARKS — Both of Wilkinson County Christian Academy’s varsity basketball teams advanced to the semifinals of the 2020 MAIS Class 1A State Tournament at Delta Academy.

In one of the girls’ first-round games that took place last Tuesday night, the South No. 3 seed WCCA Lady Rams pulled off a huge upset by defeating the North No. 2 seed Delta Academy Lady Raiders in convincing fashion, 47-26.

Head coach Mike McGraw said the key to the Lady Rams’ win on Delta Academy’s home court was their defense.

“Every time they took a shot, we had a hand in their face,” McGraw said. “We out-rebounded them as well.”

The Lady Rams will take on either North No. 4 seed Desoto School or South No. 1 seed Riverdale Academy in the girls’ semifinals Friday at 2:15 p.m.

In a boys’ first-round match-up, the South No. 1 seed and South State champion WCCA Rams held on for a 61-56 win over the upset-minded and North No. 4 Sharkey-Issaquena Academy Confederates 61-56 last Tuesday night.

“Shooting-wise, as a team we didn’t shoot well at all. And the defense was slow to start,” Rams head coach Ken Perry said. “But in defense, we’ve got half the team sick. But they overcame the adversity.”

The first quarter ended in a 12-12 tie before WCCA outscored Sharkey-Issaquena in a high-scoring second quarter 21-18 for a 33-30 halftime lead. The Confederates tried to stage a comeback in the second half, but they could not quite get over the hump.

In what turned out to be competitive third and fourth quarter, WCCA outscored them 16-15 in the third quarter and 12-11 in the fourth quarter to keep their season going.

“We got a couple key steals. In the end, what matters is that we go the victory,” Perry said.

Roderick Bailey led WCCA with 23 points while R.J. Fisher had 12 points and Andrew Sessions added 10 points. Perry said the bench stepped up in a big way for the Rams on both ends of the court, especially in the second half.

“Roderick’s inside game was big. One of the positives was our bench play. Our ninth-grader, Nathan Mudd hit some key shots. Our eighth-grader, Jack Orgeron, had a couple of key steals that turned around the game for us. It was a team win for us,” Perry said. “Hopefully, we’ll play better on Friday.”
Mudd finished with six points, as did Ben Sessions. Thomas Vannoy contributed with eight points.

Both of Franklin County’s teams entered the state tournament as champions and No. 1 seeds from Region 7-3A while both of Morton’s teams got in as the No. 4 seed out of Region 5-3A.