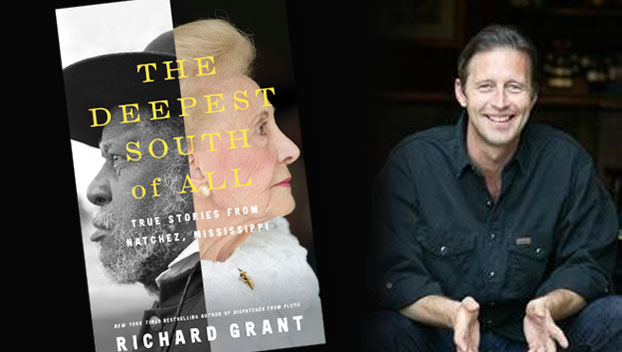 NATCHEZ — The literary world will once again shine the spotlight on the City of Natchez when a new book by New York Times best-selling author Richard Grant is released this fall.

Simon and Schuster recently announced the upcoming release of “The Deepest South of All: True stories from Natchez, Mississippi.”

The British journalist and author describes the book as an equal mixture of Natchez past and present.

“It is about my impressions of Natchez now, interwoven with sections about its history,” Grant said.

Grant said the book touches on a wide range of historical subjects, including the town’s garden clubs and their accompanying feuds, the annual Spring Pilgrimage and its Tableaux, the infamous Goat Castle murder and the story of Prince Ibrahima, a West African prince who was enslaved in Natchez, later gained his freedom and returned to Africa.

Interwoven with the historical accounts are Grant’s first-person impressions about present-day Natchez, including a look at the current state of education in the area and other complex issues facing the town.

Grant said he spent approximately 2 1/2 years traveling back and forth from his home in Jackson doing research for the book. During that period he spent extended stays at Twin Oaks, the home of Regina and Doug Charboneau.

“Regina Charboneau likes to tell people she kept an Englishman in the attic,” Grant said.

For the book, Grant said he conducted extensive interviews with between 40 and 50 people.

The cover of the book features striking portraits of Forks of the Road advocate Ser Seshs Ab Heter C.M. Boxley and Bettye Jenkins, the owner of the antebellum house Hawthorne.

The book will be launched in August at this year’s Mississippi Book Festival on the grounds of the Mississippi Capitol in Jackson.

Grant said “The Deepest South of All” is similar to his previous book “Dispatches from Pluto.”

“It is an outsider’s impressions of a place and its culture and it includes my first-person experiences,” Grant said.

Published in 2016, “Dispatches from Pluto” detailed Grant’s life in Mississippi after he and his girlfriend decided to move from New York City to an old plantation house in the Delta. The book was a New York Times Bestseller and won the Pat Conroy Southern Book Prize for non-fiction in 2016.

Grant said he chose Natchez as the subject for his next book because the town didn’t remind him of any other place he had ever visited.

“I couldn’t find a way to pigeonhole it,” Grant said.

The author said he is particularly attracted to unique American places he doesn’t understand.

“I like to be a fool in a place,” Grant said. “Where you have to learn a lot to understand a place.”

Even after researching and writing the book, Grant said he doesn’t understand everything about Natchez.