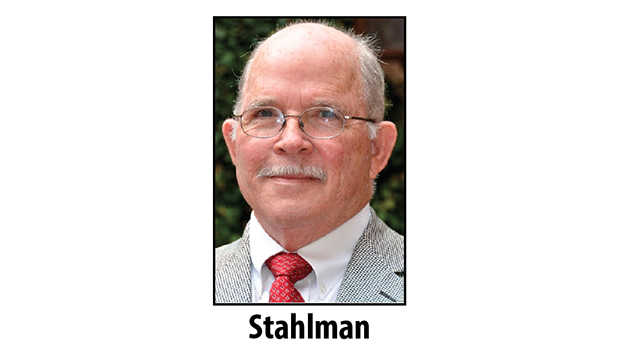 Stahlman was the former owner of Stahlman Lumber Yard and Home Center, a founder, along with James Biglane, of United Mississippi Bank and a founder along with Biglane of the Great Mississippi River Balloon Race, which is now known as the Natchez Balloon Festival.

“About 20 years ago he sold Stahlman Lumber Yard and tried retirement but retirement didn’t fit him,” said his daughter Susan Jane Drummond. “So he opened Riverview RV Park across the river (in Vidalia).”

Stahlman also was an elder at First Presbyterian Church of Natchez and an active member of the Adams County Search and Rescue team, Drummond said.

“He had a larger-than-life presence, and I feel like there will be a gaping hole in Natchez,” Drummond said of her father’s passing. “He wanted so much good for Natchez and always, always has.”

“Nobody loved Natchez more than Cappy Stahlman,” Miller said. “He was one of the city’s best promoters and one of the founders of the Natchez Balloon Festival.”

“Cappy was a huge asset for the Great Mississippi River Balloon Race/Natchez Balloon Festival and the community as a whole,” said Scott Adams, CPA partner of Silas Simmons and a volunteer of the Balloon Fest in an emailed statement to Balloon Fest volunteers. “Cappy was instrumental in the early years of the GMRBR and continued that support throughout the years of the event to ensure its success. In 2012, Cappy was named Natchezian Man of the Year for his longtime community involvement and as an ambassador for all things Natchez. Please keep his family and friends in your thoughts and prayers.”

Miller said she first met Stahlman at First Presbyterian Church when she moved to Natchez in January 1973.

“He loved his beautiful wife (Judy Stahlman) and his daughters,” Miller said. “Cappy was a family man.”

Chesney Doyle said she has known Cappy Stahlman since she was a child.

“He and Judy and their family are members of our church, and he is one of the good guys,” Doyle said. “He was always looking for a way to make a difference in the lives of other people and in the Natchez community. And, of course, he was a supporter of all the efforts to move Natchez forward whether it was through the Historic Natchez Foundation or Natchez Inc. or FOR Natchez or Friends of the Riverfront.”

Doyle said her husband, Marc, became friends with Cappy Stahlman through their mutual love of cars and both were involved in Euro Fest, a European Automobile event held in Natchez and throughout the region.

“I am crushed by the news even though I knew it was coming,” Chesney said of Cappy Stahlman’s death. “It is a genuine loss for all of us, but he has left a tremendous legacy. His wife Judy will carry on and their two wonderful daughters, Susan Jane Drummond, Deborah Prout.”

Marc Doyle said he believes Natchez lost one of its finest citizens with Cappy Stahlman’s death.

“Cappy Stahlman set a daily example of what it means to be a citizen and a husband and a father and a leader of both his beloved town of Natchez and his beloved First Presbyterian Church,” Marc Doyle said. “He was a major force in the life of Natchez and helped in many ways to make our town better. However, he was also a very modest person, who never sought recognition for his efforts.”

Marc Doyle said Cappy Stahlman was always happy to help in the community.

“Over the years, I asked him many times to help with a civic or a church cause and he never hesitated to say yes, and to say it with kindness. Cappy had a huge heart, and you could always count on his support for anything that served Natchez and its people. He was what I call a ‘solid citizen.’ And, to me personally, Cappy was a classic example of the mission statement of First Presbyterian Church at work in the world: ‘Following Christ. Serving Everyone.’ Cappy will be missed and revered by his loving family, his friends, his town and his church community.”

Drummond said Stahlman was a great father to her and her younger sister Deborah Prout.

“As a dad, he was awesome,” Drummond said. “He was tough but firm and fair as a dad. He was somebody that we could laugh with but required our very best. He loved his five grandchildren very much. I will miss him a lot. I will miss just seeing him, and I will miss knowing that he is here. I will miss him when my daughter gets married someday. I will miss him there when my son gets commissioned in the Army.”

Stahlman is survived by, among others, his wife, Judy, two daughters, Drummond and Prout, five grandchildren and one sister, Jacque Stahlman.