Signing off: Rosco on the Radio retiring after 30… 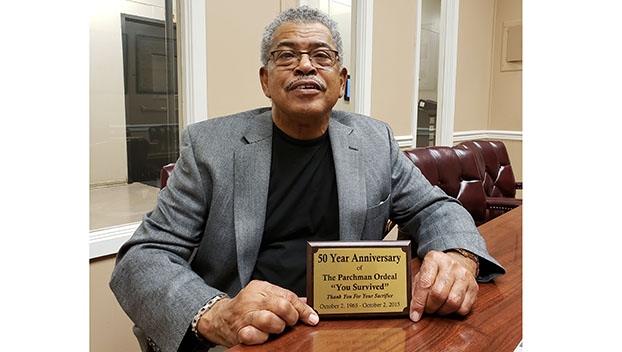 Pictured is Ronald Coleman, 71, who was wrongfully arrested and transported to the state penitentiary at Parchman when he was 17. (Sabrina Robertson / The Natchez Democrat)

NATCHEZ — In October 1965, 17-year-old Ronald Coleman marched with hundreds of Natchez citizens in an effort to right the countless wrongs that he and his family and all people of color endured each day, he said.

Coleman said he had to walk home from “the black school” every day where the students used the older and worn out textbooks.

Coleman wasn’t able to use most forms of public transportation, there were several restaurants he couldn’t eat in, water fountains he couldn’t use, and he had to sit in the balcony of the movie theater away from the whites, he said.

“We were intimidated a lot. If it wasn’t us, it was our parents,” Coleman said.

The only jobs that blacks could get involved hard, manual labor or house cleaning, he said.

At the time, Coleman said he knew that there could be consequences if he marched but never imagined that he would be arrested loaded into a bus with his mother, Geneva Coleman, and hauled off to the state penitentiary and treated like a criminal.

Darrell S. White director of Cultural and Heritage Tours in Natchez and co-producer of the documentary, “The Parchman Ordeal: The Untold Story,” with Mark LaFrancis and Robert Morgan, said there were many families such as Coleman’s who made sacrifices for future generations, most of whom can’t or are unwilling to talk about it.

“The ’60s were a period of unrest throughout the nation as people were denied basic rights,” White said. “… Many lives were lost in this effort. We salute those who made sacrifices to move our nation forward. Our objective when we undertook the project was to give a voice to those in the community who made sacrifices … shed some light on the rich history of this community that had been overlooked. … Not many people wanted to relive those moments and talk about it.”

Approximately 20 people interviewed for the oral history project, Coleman being one of them.

Coleman, now 71 years old, said he chooses to relive the fear and pain he endured so that over time those feelings wouldn’t be forgotten and that changes can continue in a nation that still struggles with racial discrimination and even mass killings today.

“As you go on in life, you hear different interpretations about what happened,” Coleman said. “There are children in school today who know nothing about it. … There were others sitting on that bus behind me and I can’t tell their story but I can tell mine.”

Coleman said he, his mother and his younger sister Daisy all decided to March that day. Daisy was only 16 and wasn’t loaded onto the bus with them, Coleman said.

As Coleman and his mother sat side by side on the bus, they were able to talk about the arrest and about what they feared would happen next, he said.

When they arrived at Parchman, he and his mother were separated as she went with other women and he with other men.

White said Parchman said the state penitentiary has a large campus that was full of inmates. When hundreds of people arrived from Natchez, cells in he “maximum security” part of the prison intended for those on death row were cleared out to house the newcomers, White said.

“They subjected them to whatever the established procedures were for those in maximum security. … Those who were wrongfully incarcerated were subsequently abused by the system,” White said.

Coleman said prison guards ordered him and his cellmates to take off all of their clothes and to drink a liquid that he later found out was a laxative.

He stayed in a cell with 8 to 10 other people that had only one toilet and one wash bin for about three and a half days until he was able to go home with his father, he said.

For those three days, Coleman said he couldn’t eat anything and became sick.

Within the next week of coming home, Coleman said he was in a bad car accident on the Canal Street bridge and was kept in the hospital for several weeks.

After graduation, he tried to enlist in the U.S. Army but didn’t qualify because of his health. Not wanting to stay in Natchez, he left his family and stayed in Las Vegas with his older brother, he said.

“I still don’t know the full extent of the mental and physical damage that the incarceration had on me. … I thought the arrest would stay on my permanent record and didn’t believe I would be able get a job in Natchez,” Coleman said.

After leaving, Coleman said he felt guilt for leaving his family, particularly his mother, in Natchez after the treatment they had gone through together.

Family illnesses eventually led him back home to be a caretaker, he said.

Even after the life-long impact that being wrongfully arrested had on him, Coleman said if he were to travel back in time to that October, he would’ve still marched.

“I don’t know if I would’ve taken my mother with me, but I would still do it,” he said. “… One of the greatest things to happen to me is for me to be able to share what happened. … I hope that something will be given back to the community out of our sweat.”