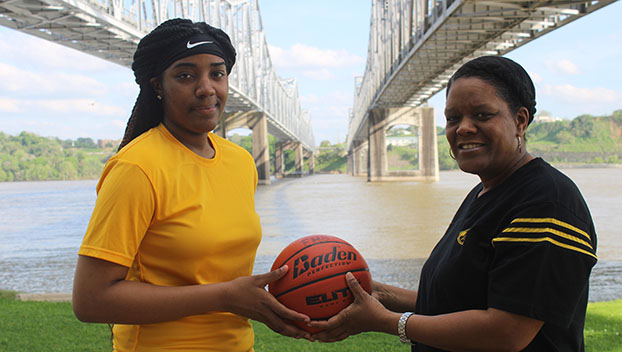 FERRIDAY — Even though the 2019-2020 Ferriday High School Lady Trojans came up short of their ultimate goal of playing for the LHSAA Class 2A state championship, they had yet another stellar season.

Led by head coach Lisa Abron and senior center Tierra Spurs, Ferriday went 25-5 overall and won the District 2-2A championship. The Lady Trojans advanced to the Class 2A quarterfinals before being knocked off by state runner-up Red River High School.

“I thought we had a pretty good year,” Abron said. “We had two goals before the season started. One was to win district, which we did. The other was to get further in the playoffs than we did last year, which we did. It was sad that we lost that last game and did not make it to the semifinals.”

Abron added that being named Coach of the Year is not just about her. It was about the team.

“I give them all the credit,” Abron said. “They put in all the energy and all the work during practice and during the game. That award goes to them as well.”

Abron added that the Lady Trojans stepped up to every challenge they face and did not back down from anyone.

“The girls stepped up when they needed to. They did everything we asked them to do,” Abron said. “Everybody attended practice. We were fortunate not to have any injuries. Everybody stayed healthy, which was good. Everybody’s grades were excellent, which was no problem. I was very pleased with the outcome.”

Spurs was a force in the post for Ferriday throughout the season. She averaged 12.5 points per game and 10 rebounds a game. She was also named the District 2-2A All-District Most Valuable Player.

“Tierra is a special type of player. I’m going to miss here. Her leadership skills. Just an overall good kid. An overall good player,” Abron said. “She had a breakout year for us. She was consistent on the offensive end. Everybody respected her as a player. I’m sorry to see her go.”

As for what made the season so memorable, Abron said the togetherness of the team.

There was one particular game that stood out to Abron more than any other.

“When I got my 400th win against Natchez (High). I didn’t know about it until midway through the game,” Abron said. “They wanted me to get that win. We hadn’t beaten Natchez in several years, so it was good to finally beat them.”

Abron said the goals for the 2020-2021 Ferriday Lady Trojans are to win district and make an even deeper run in the postseason.

“To make it to the final four. We want to go all the way next year. I think we have a pretty good chance of doing it. I’m still chasing that elusive ring,” Abron said. “We want to maintain and take care of our business early. We’re losing some big pieces. Tierra, Pacha Poole, Shakeyla McCray are all graduating. We will miss that inside presence.

“But the nucleus of our team is coming back. I have eight players who are sophomores this years that will be juniors next year. They will need to step up their leadership. I won’t have any seniors. The camaraderie needs to come back. We will have two or three players coming from the middle school program. I don’t think we’ll be rebuilding, but we’ll be reloading.”