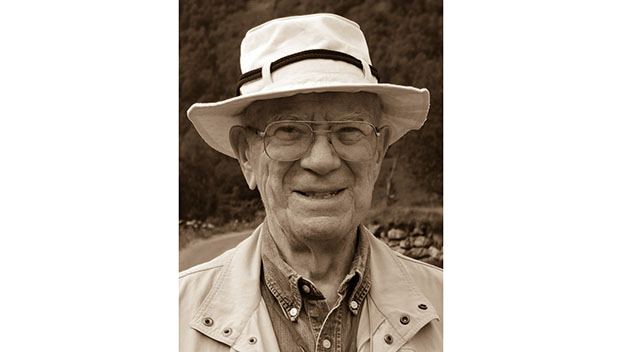 Born in Philadelphia, Pennsylvania, Armando attended Haverford School and was a

member of the Undine Barge Club, where he enjoyed sculling on the Schuylkill River. An avid explorer, he traveled extensively, having trekked on 6 of the 7 continents. His favorite and most celebrated trip was taken in 1947. He boarded a Clipper Ship, “The Elsie Fenimore,” for a 6-week expedition to track killer whales off the coast of Newfoundland, and told tales of this trip up until the day he died. Armando also bicycled Denmark two years later and received a nice pair of wooden shoes and warm handshake from the Mayor of Copenhagen.

After finishing his undergraduate studies at Trinity College in Hartford, Connecticut where he was a Deke, he joined the US Army and served as a cartographer while stationed in San Francisco at the Presidio (where he met Suzie) and then Wiesbaden, Germany. Upon receiving his Master’s in Geology from Kansas State, Armando took a job offer with Magnolia Petroleum (later Mobile) in Jackson.

After transferring to Shreveport with Mobile, he moved the family to Natchez in 1966 to work for Germany-Gulmon Oil Company, where Pop had his fondest memories of the oil patch with Buck, Bowser, Forrest, Bill, and his fellow geologists and engineers. After the misery of $10 oil in the 80’s and a few years in the oil field construction business (where he learned about the costs of maintaining heavy equipment), he became self-employed and bought another Ford oilfield car with a pair of boots, beat-up attaché case, and ultraviolet light on-the-ready in the

trunk in case he got the call to go log a well.

Armando was past president of the Natchez Swim Association, where either he or Joe Parker was the heaviest member (this was a subject of much debate) of the winning Big Fish Relays at the Bastrop meets, as well as the Natchez Geological Society. He was also a member of the Creede, Colorado Association of Field Geologists, the Mississippi Geological Society, the American Institute of Professional Geologists for 52 years, the American Association of Petroleum Geologists, the Explorers Club, and the NRA. He was an extra (farmer) in the movie North and

South, and even got a one episode bit part (Control’s driver) in the 80’s TV show The Equalizer during a visit to New York.

Pop loved meeting and socializing with everyone, as long as they would accept a tiger’s eye when parting. The friends he made on his many adventures — both young and old — still kept in touch with him until he died. Even when hospitalized, he never complained and always had a tiger’s eye or two for his nurses and visitors.

He was a big man, standing 6 feet, 5 inches tall at a full deuce-and-a-half in his glory

days. The only thing bigger was his love of life. He was the “favorite dad” in our neighborhoods, teams, groups, and squads. He was usually the first adult to say “yes.” Pop loved Natchez and was a big part of “The Main Street Scene” and for many years, the “Eola Morning Coffee Club,” where the men rolled dice to determine who paid that morning’s tab.

Despite his children’s spending habits and discreet access to his charge accounts,

Armando maintained a rather high FICO credit score from the mid-70’s until his death. It was only after his death that his children discovered his cache of $2 bills he held in his safe deposit box from winning football bets between his buddies and his father, as well as a respectable stack of this denomination in his wallet, apparently used as flash money. But his wealth was truly measured in the value he placed on his relationships with his friends and those he loved.

He is preceded in death by his mother and father, Katherine and Armando T. Ricci, Sr., his wife of 54 years, Sue Lewis Ricci, his daughter, Ellen Curtis Ricci, special animal friends Happy (our first pooch), Bitsie, Winnie, and Jojo, and a favorite friend of the family, Jeanie Dell Cauthen.

Pop is survived by daughter Roxy of Baton Rouge, son Rick and wife Elizabeth of

Memorial services will be announced via Big Hawg from his stool at The Corner Bar, and if that proves insufficient (however doubtful), The Natchez Democrat.