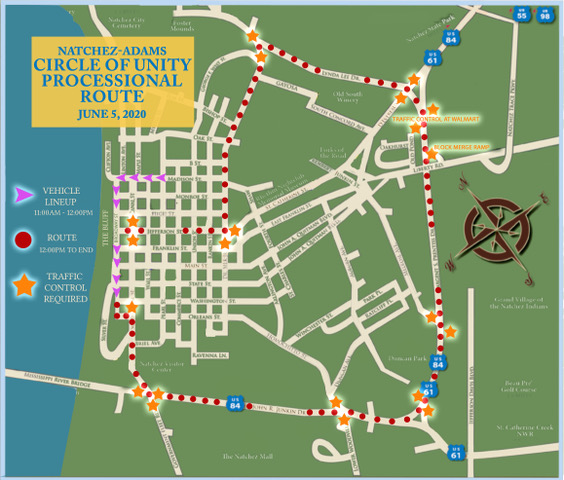 Here is a map for the route of the noon Friday law enforcement officers will lead a solemn, silent procession of cars in a circle of unity around the city. (City of Natchez)

NATCHEZ — Natchez Mayor Darryl Grennell has proclaimed Friday, June 5, as a Day of Mourning for George Floyd who was killed at the hands of police officers in Minneapolis, Minnesota, last week.

The incident was captured on video that later went viral and sparked nationwide protests.

Below is the plan presented by Grennell and Adams County Supervisor Gray for the community to grieve together:

• Friday, June 5, will be an official Day of Mourning in Natchez Adams County.

• At noon, on Friday, law enforcement officers will lead a solemn, silent procession of cars in a circle of unity around the city. The line up will be on Broadway Street before noon departure.

• During the circle of unity procession, churches are asked to toll their funeral bells for 30 minutes from noon to 12:30 p.m. in memory of George Floyd and all victims of police brutality, racial violence, hate crimes, as well as over 100,000 American victims of COVID-19.

• A Joint City-County Resolution will be presented to the Board of Aldermen and the Board of Supervisors declaring June 14, Flag Day, to be an annual day of unity in Natchez-Adams County.