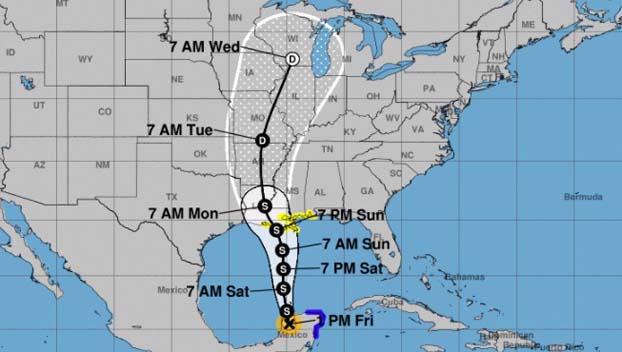 Self-filled sandbags will be located at the following locations:

For all three locations, you must bring your own shovel. NO shovels will be provided for usage.

A tropical storm watch is in effect for offshore waters in Louisiana, including coastal waters from Port Fourchon to the lower Atchafalaya River, Southwest Pass of the Mississippi River to Port Fourchon and from Stake Island to the Southwest Pass. Tropical storm-force winds also will be possible from Saturday through Monday morning, weather experts said.

In addition, a flood watch is in effect for all of southeast Louisiana and coastal Mississippi through Tuesday morning.

Cristobal temporarily weakened to a tropical depression Thursday with sustained winds of 35 mph (55 kph) after it moved inland, but strengthened back into tropical storm early Thursday afternoon.

The storm emerged this week in the Bay of Campeche from the remnants of Tropical Storm Amanda, which had formed in the Pacific and pounded El Salvador, Guatemala and Honduras.

The earliest time for the arrival in Louisiana of tropical-storm-force winds (40-55+ mph) will be Saturday night, but the most likely time will be early Sunday morning, weather experts have said. Winds will remain elevated through early Monday and will gradually start to back off into early Tuesday.

“The city is monitoring the progression and movement of Cristobal which is moving toward our direction,” Mayor LaToya Cantrell said during a news conference. “We are expecting heavy rain throughout the weekend with local totals upwards of 10 inches.”

“We’re talking wet and wind here,” Cantrell said. “Now is the time to start paying attention and getting ourselves ready.”

Gov. John Bel Edwards declared a state of emergency Thursday as the remnants of Tropical Storm Cristobal appeared poised to strike Louisiana. He also urged residents to make plans for this emergency and to include masks and hand sanitizer as the world continues to fight the pandemic.