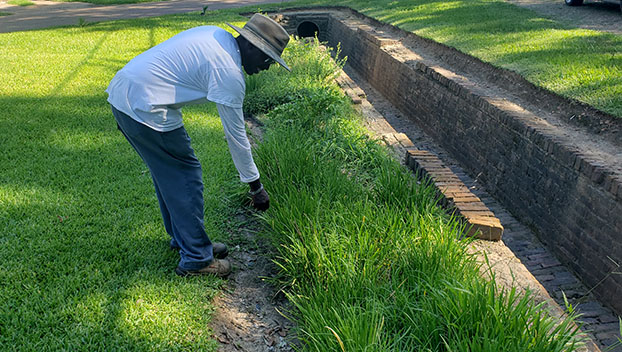 Van Hawkins works in his garden and yard on Maple Street in Natchez. (Sabrina Robertson / The Natchez Democrat)

The Dart: Natchez resident is man of many hobbies

NATCHEZ — Van Hawkins of Maple Street in downtown Natchez is a veteran with many hobbies.

Hawkins “does it all,” he said, which means everything from cooking and cutting hair to landscaping.

When The Dart landed in Hawkins’ neighborhood on Thursday afternoon, he was tending to the ferns growing in four pots on his front porch, swapping one large pot with another.

“I have to rotate them every once in a while to make sure they get enough water and sun,” he said.

Hawkins had grown all of the plants from one, he said, adding he had split it up into separate plants as it grew.

The ferns aren’t the only things growing neatly in Hawkins’ front yard. He also produces his own herbs and vegetables such as thyme, chives, rosemary, parsley, kale and green onion.

Hawkins said he has been a self-taught gardener for most of his life and joined the Adams County Master Gardeners approximately five years ago, where he exchanges advice with fellow growers.

“I’m also a professional chef,” he said, adding he likes to cook with both dried and fresh ingredients from his lawn garden.

Hawkins said he served in the U.S. Navy from 1989 to 1992 and cooked for some 300 naval officers in the nuclear submarine division.

After his service, Hawkins said he went on to take culinary classes at Copiah Lincoln Community College and later studied baking at AnnaBelle’s School of Cake Decorating in Virginia.