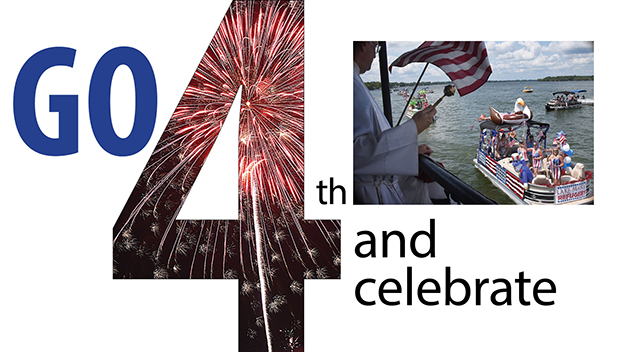 Independence Day festivities are still on the calendar after months of event cancelations due to COVID-19.

Both the annual Flotilla on Lake St. John and the Fourth of July fireworks show on the Mississippi River are set to take place on July 4, organizers said.

The Fireworks show is scheduled to take place at 9 p.m. Saturday, July 4.

“We feel like viewers have the ability to practice social distancing if they are higher-risk or feel like they need to do that. You can park and watch or because the fireworks can be viewed from such a wide space you can easily separate yourself from others,” said Sabrina Doré, spokesperson for the Vidalia Beautification Committee. “We had one idea, for those who were really concerned, they could rent rooms at local hotels facing the river and view the fireworks there. There are a lot of ways we can practice social distancing while also celebrating America’s birthday.”

The Fourth of July festival that has taken place on the Vidalia riverfront in recent years has been canceled, Doré said.

“We are discussing plans to perhaps have something later just so we can still have that community involvement,” Doré said.

Sponsors of the show are being celebrated on social media, Doré said.

“Given the economic climate that we’re in right now we’ve had fewer donations than we would in a normal year but we have had a lot of local businesses step up and local politicians as well. I feel like we are going to make our goal.”

Doré said viewers could like the “Fireworks over the Mighty Mississippi” page on Facebook to get updates on the show.

For more information, or to sponsor the show, email vidaliabeutificationcommittee.com or call 601-807-9995.

Lake St. John has a unique Fourth of July tradition in which watercraft owners parade along the lake in the annual Lake St. John Flotilla.

Susan Harris, Flotilla chairman, said registration for the event kicks-off at 10 a.m. and lasts until noon at Spokane Resort and the Flotilla itself lasts all day on Lake St. John in Ferriday.

“There are no requirements to register,” Harris said. “If it floats, it’s a go.”

Participants may win prizes in both small and large craft categories, many of which will be decorated in various themes.

“There is no set theme,” Harris said. “You’ll see a little of everything and a lot of patriotic boats as well.”

“He is a resident of Baton Rouge and stays here often on the lake. He has a camp here. He was chosen due to his volunteerism and willingness to help out on the lake,” Harris said.

During the COVID-19 pandemic, it’s up to the boat owners and spectators to enforce whatever rules necessary to prevent spreading infection, Harris said.

“Boats stay at least six to 10 feet apart, which they usually do anyway and it’s up to each individual boat owner to set the rules on their craft. The same goes with spectators who may view the flotilla either from Spokane Resort or from a private pier on the lake. We encourage people to follow the guidelines set by the state but we are not in any position to enforce them.”

Harris said 95 Country would broadcast the event live and give away door prizes. Fireworks will be launched at dusk.