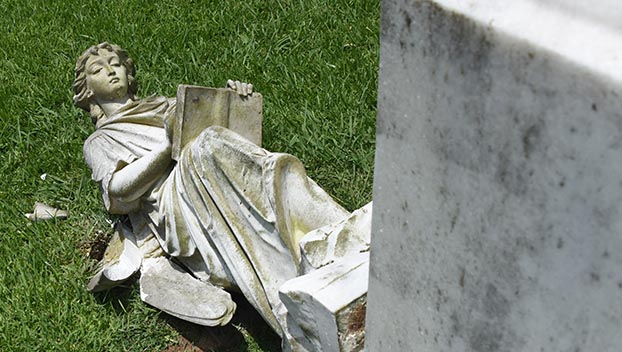 The Turning Angel statue lies on the ground. (Ben Hillyer / The Natchez Democrat)

NATCHEZ — In two weeks, the Natchez City Cemetery has raised approximately $5,000 to restore the Turning Angel monument after a vandal damaged the landmark statue.

On Monday, the cemetery started a GoFundMe account to help raise donations. In the first 24-hours of the online fundraising effort, the cemetery raised a little more than $2,000 from 26 donors. Approximately $3,000 had been sent to the cemetery through the mail, Natchez City Cemetery Board President Elise Rushing said Tuesday.

The GoFundMe page is here.

The cemetery hopes to raise up to $40,000 on the GoFundMe page to help restore the angel and, if any money is left over, purchase cameras and other items to help make the cemetery a more secure place, Rushing said.

“We are very grateful for the response from the community,” Rushing said.

The Turning Angel is a landmark of Natchez and has stood watch in the Natchez City Cemetery over five young girls who perished in a 1908 explosion at the former Natchez Drug Company since the drug company’s owner placed the statue in honor of the victims.

The angel was damaged on June 23 when a vandal toppled the monument from its base.

Natchez police arrested Austin Petty, 20, who was charged with felony malicious mischief over $25,000.

“What we want is the most qualified group,” Rushing said. “We also want to deal with someone relatively close.”

With the uncertainty of the current pandemic and how it will affect future donations from the city and future fundraising efforts, Rushing said the city is thankful for all of the donations that have been given to the cemetery.

Rushing said the cemetery is always working on a variety of projects, including work on statues, fences, gates and other artwork in the cemetery. Even still, the cemetery barely gets by with the funding it receives from the city and donations each year.

The cemetery’s biggest expense is the payroll for the small crew of employees that tend to the cemetery each day. Much of the work requires using weed trimmers instead of mowers because of the small plots.

“We are always in need,” Rushing said.