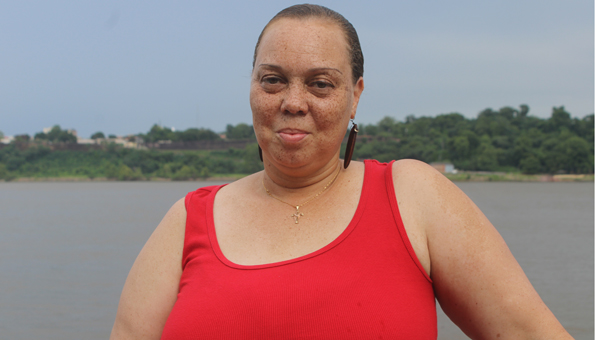 Delores Whitley is from Vidalia and will teach at Natchez High School during the upcoming school year. (Patrick Murphy, The Natchez Democrat)

VIDALIA — Delores Whitley was sitting on a bench and staring at the Mississippi River when The Dart landed at the Vidalia Landing on Wednesday afternoon.

Whitley was thinking about the upcoming school year where she will be teaching geometry at Natchez High School.

“I’m excited to be back at Natchez Adams School District,” said Whitley, who now lives in Vidalia and taught as a math teacher last year in the Wilkinson County School District.

“I just loved the challenge and trying to figure out problems,” Whitley said. “I had great math teachers, and I went to school in Natchez. I just loved school. I would rush home and do my homework first and then go play outside.”

Before Whitley began substitute teaching, she graduated from Rust College in 1988 in Holly Springs. She earned two Bachelor of Science degrees in computer science and business administration.

In 1999, Whitley earned her teaching certification at Alcorn State University.

“You have to be in teaching for the love of it instead of the money,” Whitley said.  “You have to be able to relate to kids, understand where they come from and teach them morals and values. Sometimes you have to put the books away and talk about life.”