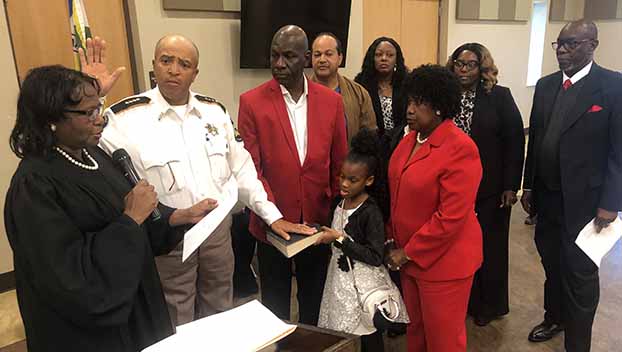 Constable Willie B. Jones is sworn in earlier this year. (File photo / The Natchez Democrat)

Despite protests from some individuals who questioned the legality of using an official law enforcement vehicle in a political event, Adams County Northern District Constable Willie B. Jones has every right to use his vehicle in such a political event, according to state and local officials.

TJ Werre, acting communication director for the Mississippi Attorney General’s office, said state law requires the Adams County Board of Supervisors to provide uniforms constables and markings for constables’ vehicles, but constables buy their own vehicles.

Therefore, Werre said the question of whether Jones could use the vehicle in a political parade is a matter for the Adams County Board of Supervisors attorney to answer.

“Elected officials such as Willie B do not check their rights in at the door when they are elected,” said Scott Slover, attorney for the Adams County Board of Supervisors. “Any regulations that have a chilling effect on his speech must have a compelling state interest, and it must be narrowly tailored to meet that interest in order to survive a constitutional attack.”

After the motorcade on Sunday, some people took to social media with posts questioning why law enforcement was participating in a campaign parade for a mayoral candidate, and Miss-Lou businessman Roy King III raised questions about the legality of the using an official law enforcement vehicle in such an event.

“The clear intent of this motorcade was for political gain of Mayoral candidate Phillip West,” King wrote in an email blast to Natchez elected city officials, including Natchez Mayor Darryl Grennell, all six current Natchez Aldermen, The Natchez Democrat and other business people. “Heading this motorcade was a marked law enforcement vehicle which had its lights and sirens on. Following the motorcade was an additional marked law enforcement vehicle, which also had its lights and siren on.”

When questioned, King could not specify which law enforcement agency or agencies were involved.

Both Natchez Police Chief Walter Armstrong and Adams County Sheriff Travis Patten said none of their officers participated in Sunday’s event and that it is against their policies to use their resources to support such a political event.

“Yeah. I led the parade,” Jones said. “Let me get this straight. I am an elected official. No county pays for my nothing. That is my vehicle. I paid cash for that vehicle. My time is whenever I feel like I can go to work. That is my time. Whenever the court has papers for me to serve then that is when I go to work.”

Armstrong said he was not aware of any permit for Sunday’s parade but said there is no permit requirement for such a motorcade event.

“As far as the constable or any other organization, there is no obligation to check with us before doing the escort,” Armstrong said. “In Jackson and many other places, you have private entities escort funerals, guys on motorcycles, which is what some cities prefer because it won’t tie up law enforcement, and some funeral homes have their own little escort deal. They have an obligation to follow the rules of the road.”

Patten said he has a policy barring any Adams County Sheriff’s Office employees from participating in any political activity.

“We cannot escort any political campaigns in county vehicles,” Patten said, adding the constable can legally use his vehicle to lead such a procession.

“No one from the sheriff’s office used a county vehicle to escort that parade nor was anyone from this office involved in it,” Patten said. “As far as the escort goes, the constable is the one who actually escorted that parade and since the constable has to purchase their own vehicle that is up to them whether they choose to get involved in somebody else’s politics or not, because that is the office of the constable. As far as Adams County Sheriff’s Office goes, we are not getting in those parades like that, and we are staying out of everybody else’s politics because everybody needs to run their own race.”

“I do not get involved in other people’s campaigns,” Freeman said. “That is not something I would do.”

Jones said he paid for the gas out of his own pocket.

“When the people elect a constable, that’s the people that elect the constable,” Jones said. “When you see other vehicles, police and sheriff’s vehicles, that’s the county and city that own those vehicles. When you see a constable, he went in his own pocket and paid for it. That is my car. That was my capacity. I’ve got the same jurisdiction as the sheriff. I can go where I want to go, city or county. That is my car. I can move the car whenever I get ready. I paid for that car. I paid for my own gas. The taxpayers don’t pay me nothing.”