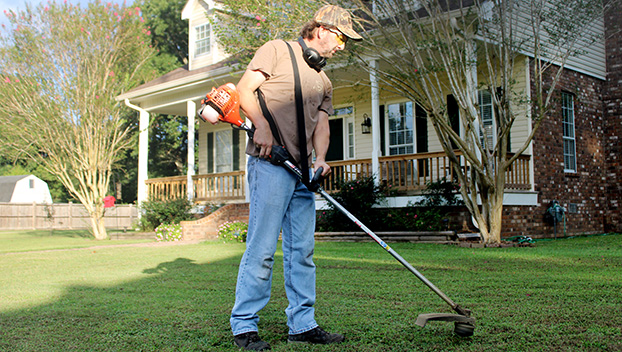 Peter Dale was using his Weed Eater on some weeds on his front yard on Primrose Lane. (Patrick Murphy / The Natchez Democrat)

NATCHEZ —Two neighbors on Primrose lane in Natchez like to have a friendly competition over improvements in their yards and houses.

Peter Dale lives next to Bryant Murray on Primrose Lane in Natchez. Dale’s house is on the left from the street beside Murray’s house on the right. Dale was using his Weed Eater on some weeds on his front yard while Murray could be heard mowing his lawn behind a fence when The Dart landed Wednesday near Primrose lane.

“If he mows his yard, then I have to mow my yard because it does not look as good as his,” Dale said. “He paints his porch, and I have to one up him and paint my porch and paint a bannister. The competition pushes us to be better neighbors.”

Dale said he and his wife, Veronica, have lived on Primrose lane for four years and are fortunate to have great neighbors on both sides of their house. Dale said his house sits on two lots and he owns 10 acres of land. Most of the land is behind Dale’s house near St. Catherine Creek where a tan fence provides a buffer between the house and the creek.

“In my free time, I like to spend my time outdoors and sometimes go down to the creek,” Dale said. “I aspire to learn more about the wildlife, trees and flowers.”

Dale is the Adams County Geographic Information System project manager where he has worked for 15-to-16 years. Dale said his job involves mapping, computers and databases.

“I have always enjoyed mapping and it is about the science of where something is located,” Dale said.

Dale and his father, John Dale, moved to Natchez from Oxford, England, when Peter was 13 years old. Patti Dale, Peter Dale’s mother, still lives in Oxford. Dale said he likes living in Natchez with his wife.

“Natchez is a small town with Southern culture,” Dale said. “We have put in a lot of time and love into our house because it was in bad shape when we bought it.”