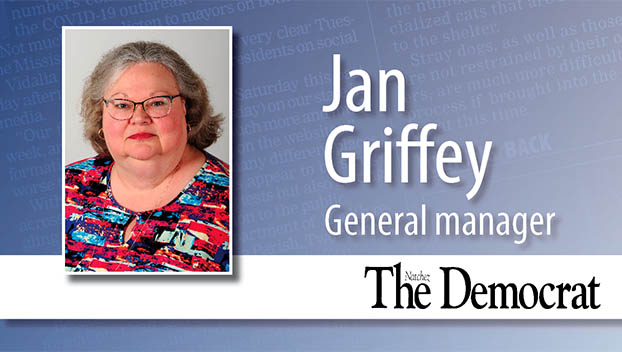 The big news this week out of the Adams County Board of Supervisors’ meeting was that a Natchez man seeks to form a “minuteman” group here.

That man, Jack Blaney, tried to make a distinction between a minuteman group and a militia group, but I do not understand the difference, and in the end, it does not matter.

Further, Blaney invoked a spin on the name of his group akin to Proud Boys, the notorious and violent group, which has shown up and disrupted peaceful protests around the country and generally wreaked havoc. I think Blaney said his group is going to be called Boys Proud to Live in Adams County or something similar. Blaney knew what he was doing.

Talk of such a group setting up shop in Natchez has caused very real fear among many in our community, particularly our Black community members. Many local Black citizens vividly remember the horrific violence suffered here prior to and during the civil rights movement and are witnessing the reopening of racial wounds and division around the country. We all have every reason to be fearful of such a group.

Here are some things you need to know: Jack Blaney is no more interested in starting a minuteman group or anything similar than I am.

What he is interested in doing is getting the goat of Adams County Sheriff Travis Patten.

Blaney and Patten have some kind of long-running feud. Both men may deny the feud, but it is well evidenced by the swipes each have taken at the other for years, mostly on social media, each attempting to discredit the other.

What needs to happen now for the benefit of this community is for Patten and Blaney to sit down together quickly, talk out the issues that have led to their obvious dislike of one another and come to some kind of agreement to disagree or to work together.

The important thing is this all needs to stop because our community does not need it. Residents of this community are living in fear of what such a group would mean here and the unwanted and harmful attention it could cause here.

Both men are passionate about what they believe in.

Both men appear to be honest and hard working.

Both men seem to want what’s best for their community.

Both men could find much common ground — like the entire country could — if they started by reaching out and seeking to get to know one another as people rather than throw barbs at one another on social media and say things intended to get under one another’s skin.

I think only good could come for our community for Patten and Blaney to sit down together, break bread perhaps and talk things out. Who knows, maybe an unlikely friendship will form. Stranger things have happened.

I am going to call both of them and ask them to join me for lunch next week. I do not want to write about it. I do not even want to say a word. I simply want to facilitate a truce — and be there to referee like any good Big Momma would.

And you will not read another thing about this from me — unless one of the two refuses to sit down together.

We have a good thing going here in Natchez and Adams County. We do not need anything to set that off course. Let’s put an end to this now.

Jan Griffey is general manager of The Natchez Democrat. You may reach her at 601-445-3627 or by calling jan.griffey@natchezdemocrat.com. Readers are invited to submit their opinions for publication.