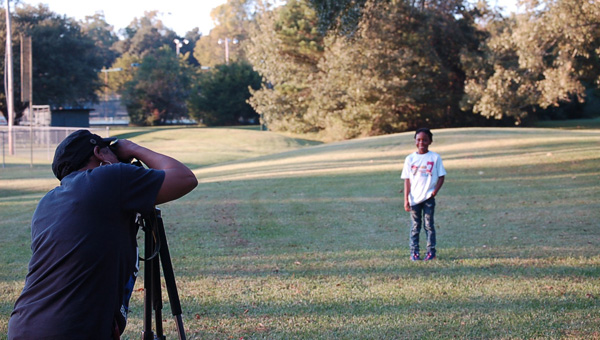 NATCHEZ — Pat Logan steadied her camera on top of its tripod and zoomed in on her nephew, Ayden Logan Bell, holding a golden number seven-shaped balloon when The Dart landed on Duncan Park Wednesday.

The afternoon sun and cool breeze provided the setting for a birthday photo shoot for Ayden, who turned 7 Saturday, Oct. 24.

There to celebrate with Ayden was his “Aunt Pat” behind the camera, his grandmother Marilyn “Mammee” Logan and his mom, Cortney Logan.

The number seven in the Bible signifies perfection so it was important that “Aunt Pat” focused her lens just right to capture Ayden’s smile and bright brown eyes, Logan said.

“Taking pictures is my hobby,” Pat said, adding she has captured many of Ayden’s birthday milestones since birth.

Ayden worked to stay still for the camera. His favorite thing to do is run around outside and play, he said.

“I play baseball, basketball and football,” he said, adding when he grows up he would like to be a professional baseball player.

For his birthday, Ayden said he is planning a sleepover with one of his teammates, Bently, after they finish playing a baseball tournament in Nachitoches.

Ayden said he plays shortstop, third base and the outfield for the Louisiana Cluggers and running back in football.

Ayden is not new to sports, Cortney said.

“It’s his third year playing baseball,” she said. “He’s outside all day every day when he is not at school.”