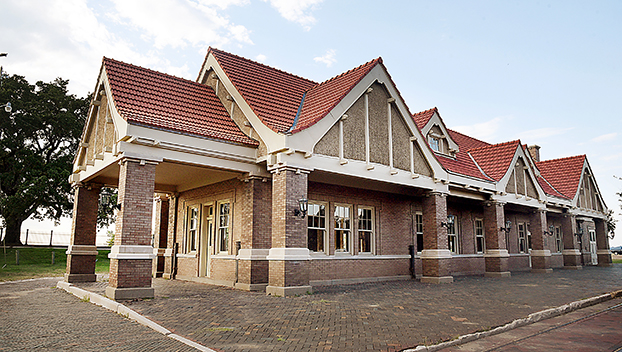 The Depot restaurant proprietors hope to be open by summer

NATCHEZ — Local film producers’ plans to renovate the former Cock of the Walk restaurant and historic Yazoo and Mississippi Valley Railroad Depot on Broadway Street into a restaurant and entertainment venue are nearing completion, they said.

“We are getting close to wrapping up the design phase of the depot,” John Norris of Church Hill Variety LCC said Tuesday during the regularly scheduled meeting of the Natchez Mayor and Board of Aldermen.

In addition to the celebrity-themed restaurant, Architect John Weaver said the facility would include an amphitheater, a concrete bluff trail, a brick patio and outdoor public restrooms and would incorporate the existing street side plaza.

The design and planning phases leading up to construction are approximately 90% complete, Weaver said.

Norris and his partner Tate Taylor, who is the director and producer of films such as “The Help,” “Get on Up,” and “Ma,” said Tuesday that COVID-19 slowed the progression of the project.

The goal is to have The Depot, as the restaurant will be named, open by summer 2021 or, more optimistically, in the spring “once we’re out of the COVID situation,” Norris said.

The requirements set by the city’s Request for Proposals allow up to 180-days to complete the project once the lease of the city-owned depot building has been signed.

Norris said Church Hill Variety LCC was preparing to meet the deadline once a lease agreement with the city has been singed while making sure that the plans for the historic train depot are agreeable with the Historic Natchez Foundation and the Natchez Preservation Commission throughout the process.

“By summer for sure and really that is just because of COVID,” Norris said of the anticipated completion date. “We’re setting the builder and everything up with that (180-day) completion deadline. Once you decide that this is a great plan, we’re ready to go. … There is no more discovery at that point.”

Taylor said he received calls from other parts of the state from people who were excited about the project.

“We have an opportunity to bring in weekend tourists who just want to go somewhere else for the weekend and spend time on the river and just to hang out on the bluff. That is an asset that we didn’t really think about when we got started,” Taylor said.

“To have people able to walk around all over the city with a destination is going to be fantastic. People love options and they will be able to have a whole culinary experience just by walking around to all of the different restaurants in Natchez with each one offering something different.”