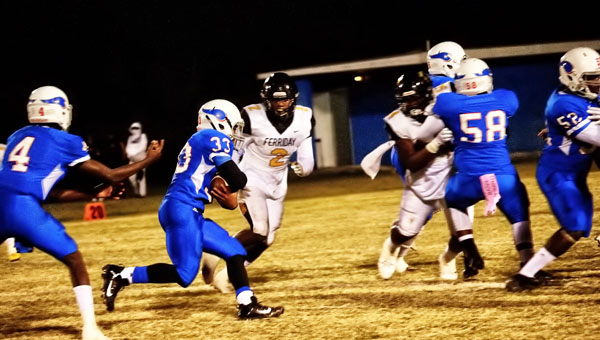 VIDALIA — The Vidalia High School Vikings were scheduled to host to the LHSAA Class 3A Bossier High School Friday night at Dee Faircloth Viking Stadium in their regular-season finale, but that game will not take place.

Despite a 48-16 loss at now-No. 5 Mangham High School in what turned out to be its final District 2-2A game of the season that put Vidalia at 1-4 overall and 1-4 in district play, Norris said they are already in the Class 2A Playoffs due to their strength of schedule.

A win over a Bossier team that, despite also being 1-4 overall after a 68-14 loss to District 1-3A foe and now-No. 8 Green Oaks High School, is in a higher classification would have helped Vidalia move up higher in the Class 2A power ratings.

Would have because Norris found out late Wednesday that its game against Bossier has been canceled. Which means the Vikings’ regular season is officially over.

“Now we’re just waiting until Sunday night (when the brackets are released). We’re No. 29 as of now,” Norris said.

Norris added that if other teams currently ahead of them, the Vikings could still move up in the Class 2A power ratings. Even so, they will still be on the road for the bi-district round that takes place on Friday, Nov. 27.

JONESVILLE — It’s been a few years since Block High School’s football team has been in a position to play for the LHSAA District 3-1A championship. The Bears will have that opportunity Friday night when they travel to Natchitoches, La. to take on the St. Mary’s High School Tigers.

Kickoff between Block at St. Mary’s at Turpin Stadium on the campus of Northwestern State University in Natchitoches is set for 7 p.m. “They don’t have a home field (at St. Mary’s), so they play all their home games there,” Bears head coach Benny Vault Jr. said.

Block, which will be participating the Class 1A Playoffs that start next week, will likely assure itself a home game in the bi-district round with a win over St. Mary’s. A loss and the Bears will assuredly be on the road.

“It’s for a share of the district championship. We win this one, it will be a three-way tie for first place between us, St. Mary’s and Logansport, provided they don’t’ lose on Friday (at Northwood-Lena),” Vault said.

For that to happen, Vault said his defense will have to stop the pass while the offense will have  to protect the ball and continued to be balanced to keep the Tigers’ high-powered offense on the sidelines.

“They like to pass the ball. They have a good quarterback. They have a pretty good offensive line,” Vault said. “We try to stay balanced. In the past, I was 90 percent run and 10 percent pass. Now it’s 50-50 or 60-40. Our quarterback threw a couple of interceptions in which the receivers were wide open, but he couldn’t get the ball far enough. If we can protect the ball, we’re going to be okay.”

Standouts who Vault said have to have a big game for the Bears to come out on top are Dexture Jefferson and Zavion Green on offense as well as the entire defensive backfield.

“Dexture also plays defensive end. I depend on him a lot,” Vault said. “Tra’darius (TJ) Jones and JR Curry need to step up.”

FERRIDAY — Delta Charter School was scheduled to travel to Monroe, La. to take on LSWA Class 1A No. 3-ranked and defending LHSAA Division IV state champion Ouachita Christian School in a key District 2-1A game for both teams Friday night.

Instead, the Storm will have to wait another week to return to the field as its game against the Eagles has been canceled. Delta Charter (3-2, 3-1) will play next Friday night in the bi-district round of the Class 1A Playoffs.

The Storm had its previous two games, home against St. Frederick High School on Nov. 6 and at Cedar Creek School on Nov. 13, canceled due to a student-athlete testing positive for COVID-19. Even though the student is a virtual student, he also plays football and was around the football players, eventually forcing them to go into quarantine.

The student-athlete as well as a teacher’s aide both tested positive for COVID-19 earlier this month, forcing all sixth- through 12th-grade classes to go to virtual learning from Nov. 6 until after the Thanksgiving holiday, with in-person classes returning on Monday, Nov. 30.

However, Delta Charter principal Jimmy Comeaux said a lot of Monroe schools shut down due to COVID-19 concerns. But according to the Louisiana High School Athletic Association’s website, Ouachita Christian, a private Christian school, is not one of them.

“There’s nothing to gain from playing the game,” Comeaux said. “This day and time you never know.”