Alabama and Ohio State will meet in Miami to… 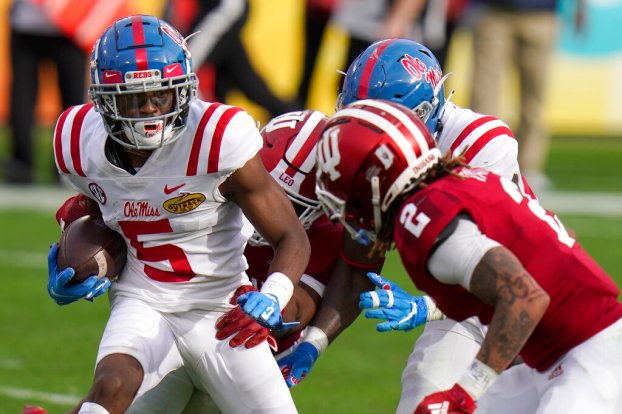 TAMPA, Fla. (AP) — Matt Corral threw for 342 yards and two touchdowns to help Mississippi beat No. 7 Indiana 26-20 on Saturday in the Outback Bowl.
Corral’s 3-yard pass to Dontario Drummond put the Rebels (5-5) ahead for good with 4:12 remaining. Ole Miss came through with one more stop for its first non-losing record since going 6-6 in 2017. First-year coach Lane Kiffin was rewarded before the game with a new contract.
Drummond finished with six catches for 110 yards. Corral completed 30 of 44 passes without an interception, including a 5-yard throw to Casey Kelly that put Ole Miss up 13-3 midway through the second quarter.
Jack Tuttle was 26 of 45 for 201 yards in his second start in place Michael Penix Jr. for Indiana (6-2). Stevie Scott III rushed for 99 yards and scored on runs of 3 and 2 yards to help the Hoosiers wipe out a 20-6 deficit in the fourth quarter.
Ole Miss missed the extra point after Drummond’s go-ahead TD catch. Indiana drove to the Rebels 33 before stalling and turning the ball over on downs in the final minute.
FIESTA BOWL
NO. 12 IOWA STATE 34, NO. 25 OREGON 17
GLENDALE, Ariz. (AP) — Breece Hall ran for 136 yards and two touchdowns, Brock Purdy accounted for two scores and Iowa State beat Oregon in the Fiesta Bowl.
The Cyclones (9-3) used their ball-control offense to dominate the time of possession and keep Oregon’s offense off the field for long stretches to win their first New Year’s Six bowl.
Hall, an AP All-American, had 34 carries and his ninth 100-yard game this season. Purdy, who went to high school in nearby Gilbert, threw for 156 yards and a touchdown on 20-of-29 passing, adding a touchdown on the ground. Iowa State had a time of possession advantage of more than 25 minutes.
Oregon (4-3, CFP 25) alternated between Tyler Shough and Anthony Brown at quarterback, but couldn’t sustain anything on offense and was plagued by numerous mistakes.
The Ducks were a replacement in the Pac-12 championship game after Washington pulled out and beat Southern California for their second straight title.
GATOR BOWL
KENTUCKY 23, NO. 24 N.C. STATE 21
JACKSONVILLE, Fla. (AP) — A.J. Rose ran for a career-high 148 yards, Chris Rodriguez added 84 yards and two scores and Kentucky held off North Carolina State in a chippy Gator Bowl.
Christopher Dunn missed two field goals for the Wolfpack (8-4), who trailed 16-14 late when Bailey Hockman threw his third interception of the game. Rodriguez scored on the ensuing play, going nearly untouched for 26 yards.
NC State got a final chance after Jordan Houston scored with 1:10 remaining. But Allen Dailey recovered Dunn’s onside kick, and the Wildcats (5-6) ran out the clock. Coach Mark Stoops got a Gatorade bath following the team’s third straight bowl victory, which ended a tumultuous season that included the loss of offensive line coach John Schlarman.
Kentucky finished with 281 yards on the ground, helping offset one of the nation’s worst passing attacks. Stoops fired offensive coordinator Eddie Gran and quarterbacks coach Darin Hinshaw after the team’s regular-season finale and later hired Los Angeles Rams assistant Liam Coen to fill those roles in 2021.