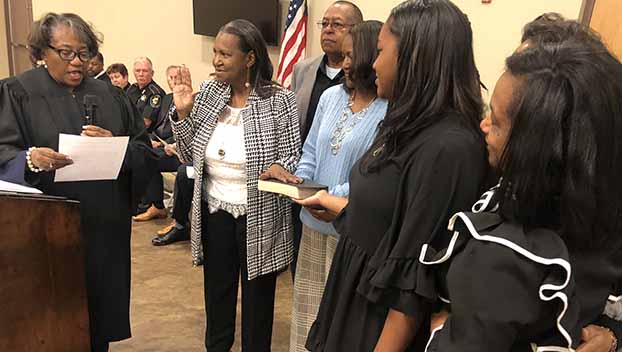 Patterson was elected as the Adams County Tax Collector in 2019 with significant experience working in the tax collector’s office.

Patterson’s daughter, Tamara Johnson Williams, said her mother was a Natchez native and ran for the tax collector’s office after a four-year retirement.

“It was her time,” Williams said of her mother running for office. “She had a very outgoing personality and always spoke her mind. Her bond with her family was inseparable and loyal. There was never a dull moment with her.”

Verna Deanna Wallace, who knew Patterson for more than 40 years, said she was deeply saddened by the loss of her best friend.

“Knowing Rose was truly a God sent blessing,” Wallace said. “She was a special person in my life. She and I were as close as any two sisters could be.”

Wallace said she and Patterson celebrated many family occasions together — weddings, birthdays and visits with grandchildren in Georgia.

Adams County Board of Supervisors president Angela Hutchins said she knew Patterson for as long as she has been a supervisor as Patterson worked for Adams County in various capacities.

“I’ve known her over 20 years,” she said. “During the time I’ve known her, she has always been helpful to me. She is going to be truly missed.”

After Patterson took office as tax collector in January 2020, Hutchins said she could see that Patterson had made positive changes in that role.

“She was trying to get that office the way it needed to be,” Hutchins said. “She was the type that didn’t play about her work. She was dedicated to her office. … My heart goes out to her family and my prayers are with them.”

Hutchins said the board of supervisors would have to appoint someone to Patterson’s position temporarily until a special election is held for a new tax collector.

Terrence Bailey, the chief deputy tax collector, said he started working for Patterson right after she took office in 2020.

In a short time, Bailey said Patterson became a close friend and a second mother to each person in her office.

“She was a phenomenal woman, very strong, witty and had a heart of gold,” Bailey said. “She would help anyone out. There was never a bad day with her. She found a way to brighten everyone’s day, like a ray of sunshine. She was the person that knew how to cheer you up if you were having a bad day. She was everybody’s second mom. She loved hard.”

Bailey said he would cherish memories of traveling with Patterson to training in Bay St. Louis and having a good time.

“Coming back (to work) without Rose is extremely hard,” he said. “Things aren’t the same and will never be the same. She was more than just a boss. We are all a family. … Keep our office in your prayers and remember her for her smile. She had a smile that could light up a room. She helped a lot of people. Keep the good memories because that is what she would want.”