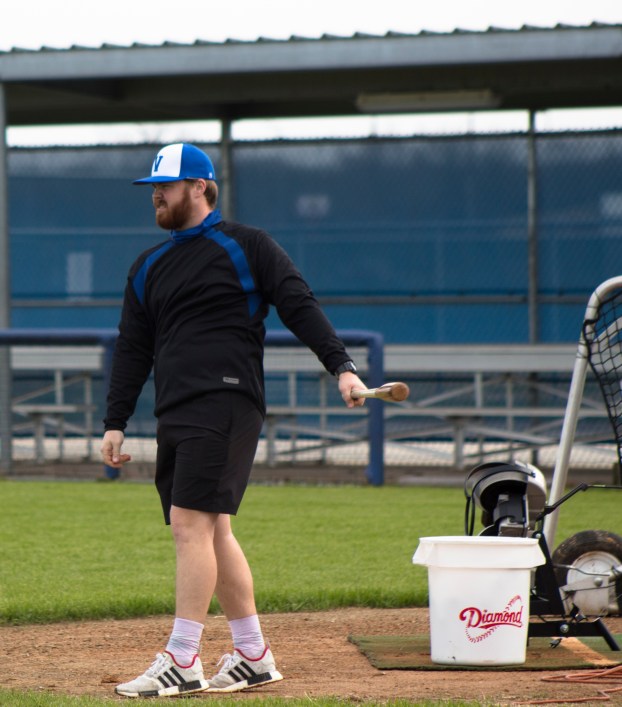 Vidalia Head Coach Nick Kennedy warms up his players through fielding. This season will be his first as head coach of the varsity team at Vidalia. (Hunter Cloud The Natchez Democrat)

Nick Kennedy tosses a ball in the air and lets a rip as his bat goes crack, and sends the baseball soaring through the sky into left center field. A player in the dugout remarks “What if he just hit it out of here,”.

Kennedy is Vidalia’s varsity baseball head coach is young, has a reddish beard, and is working to develop a close bond with his kids. He said he coached many of the Vikings players in junior high, and he coached them as freshmen and sophomores.

The 24 year old said he remembered a coach named Ed Rich. Coach Rich was Kennedy’s football and baseball coach when he played at Southaven high school in Mississippi.  Kennedy said the coach made a connection with his players, regardless of the age gap between them.

“He was older than us, but he had the same bond with us,” Kennedy said. “He knew what we enjoyed doing. It felt like the age gap was not there. I felt like that is what I want to be. I want to be there for the guys, I want to have a relationship with the guys.”

From his perch on the dugout bench Kennedy watches his players play a version of golf on the field, the game involves hitting a ball with the bat to a specific spot in a certain number of attempts.

Players crack jokes, stay loose and connect with Kennedy in a multitude of ways. He said he will take them fishing from time to time, and said he is always one phone call away if they ever need help.

“I strive to build a relationship with the kids, and make sure that not only do they have a successful career in baseball, but in life as well,” Kennedy said. “

Kennedy said the leaders for the Vikings this season are four seniors, all of whom he has not coached as a head coach before. Those seniors are Brett Walsworth, Peyton Fort, Xander Harveston, and Adam Eames.

Vidalia has had just one COVID scare this season, he said.  Back in December, his team’s evaluation period was interrupted because they all had to quarantine. Kennedy said it has been smooth sailing since December.

On Jan. 25 the Vikings got the go ahead for their baseball season, and Kennedy said they hit the ground running. He said if something were to happen then he has a feeling his young group of kids would step up in the right spot.

A baseball team should not be one dimensional, Kennedy said, and to have 12 to 13 players who can play more than one position is important in a season where injuries, and COVID could potentially sideline a player.

A close bond between teammates is also important Kennedy said, if the players are friends off the field he does not have to worry about them as much.

“We are a big family,” Kennedy said. “That is our motto. Our little saying this year is D.Y.J. That is do your job. I feel like everyone is going to do their job and be one big family.  I just want you to do your job. Field the ball, throw the ball, and hit the ball.”