No. 1 South Carolina gets 19 from Henderson, beats… 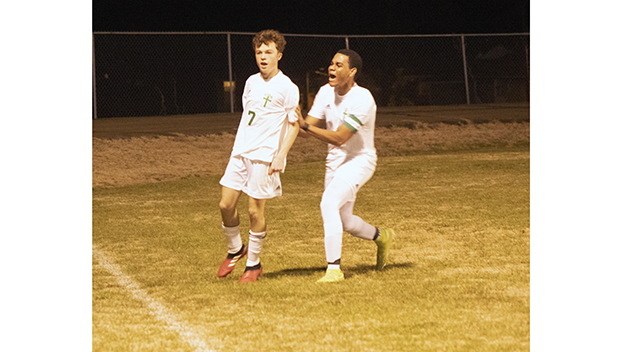 John Carter Austin jumps into the air a second time after scoring a header against ACCS on Jan. 19. His teammate Kennedy Williams joins in on the celebration. Cathedral will play Hartfield Academy in the playoffs but it is unknown when the game will be played this week because of road conditions. (Hunter Cloud The Natchez Democrat)

Cathedral had a playoff soccer game against Hartfield Academy in Flowood scheduled for Monday, but head coach Dennis Hogue said he did not think it was going to happen due to weather on Feb. 10.

He was right. A mixture of freezing rain, snow and sleet blanketed Mississippi on Sunday and Monday, and the accumulation of snow and ice made the drive from Natchez to Flowood treacherous, he said.

Hartfield’s coach offered to play on Wednesday, but Hogue said he politely told him that was not going to happen under the current road conditions. Hogue said his concern was not about field conditions but the fact his team couldn’t even travel to Cathedral for practice let alone a two hour drive to Flowood.

Despite not being able to practice, Cathedral is preparing by watching soccer games in the English Premier League, or previous games that Hartfield Academy has on its Facebook page.

At this point in the season, Hogue said missing practice is not going to hurt his players.

Hogue said his athletic director Craig Beasley said they just had to get their games done by Saturday. He said depending on the forecast for Wednesday on Tuesday evening he will make a decision on if his team is going to Flowood for the game.

He said the MAIS is asking coaches to complete the second round game by Feb. 20 because the championship games are being played on Monday.

“If we can’t play our game until Friday, win or lose we would have to play again on Saturday,” Hogue said. “That is a lot to ask. So I don’t know why the MAIS is wanting to get this done by Saturday.”

Hogue said he thinks Mother Nature is trying to let the Green Wave keep playing and extend the soccer season. He said when the game is played it will also be up to the weather.