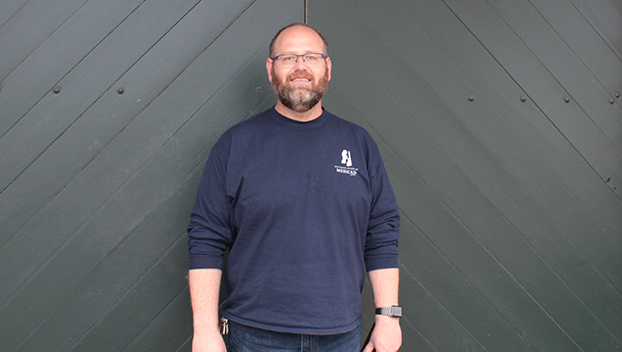 NATCHEZ — Christopher Patterson leans on the fence around 100 Main’s patio on South Broadway Street as he took his lunch break close to where The Dart landed Friday afternoon.

Patterson works for the Medicaid office nearby. He spent his life in a flat Lubbock, Texas, where blue skies would turn to a red haboob — an intense dust storm caused by strong winds — in the spring and fall. He said they had a dust storm in Lubbock this week.

On his lunch breaks, he said he walks around the bluff to see the green trees and interact with the kind people. When he first visited his husband, Dane’s, family in Natchez, he said he fell in love with the scenery.

“I saw this and I said ‘I’ve been around my family my entire life, now its your turn,’ I just saw how green it was,” Patterson said. “I saw it was not flat, and all of the trees and I just fell in love with it. I fell in love with everybody here.”

He said he met his husband, Dane Reeves, in 2005 while working for a laboratory in Lubbock. The couple got married in 2013 in New Mexico on Patterson’s birthday and the day same sex marriage became legal in the U.S. happened to be Reeves’ birthday.

When the couple first moved to Mississippi in 2014, they lived in Jackson, where Patterson was operations manager for the University of Mississippi School of Dentistry. Reeves and his husband moved to Natchez to take over a barbecue restaurant in Vidalia called The Butt Hutt. It did not take long, he said, before he realized he did not want to own the restaurant and sold it within a year.

“When you have a restaurant you are married to it. When the doors are open, you have to be ready for whatever comes your way,” Patterson said. “Anytime we would try to get out of town to go to Jackson or Baton Rouge, as soon as we would point the car in the direction to get out of town, we would get a call. We would have to turn the car around and come back to take care of whatever it was.”

After the couple sold the restaurant, they moved to Jackson to work, Patterson said. He worked in the Medicaid office there, but then a job opportunity opened up in Natchez. He said he took it after asking his husband if he wanted to move back, and Reeves told him he wished they had never left.

“We love it in Natchez, we love the community and the cohesiveness of the community,” Patterson said. “Everywhere you go you know someone.”