Rebels Head Coach Jake Winston said something along the lines of don’t let one person beat you, to his team in the middle of the second game of the doubleheader against Cathedral at the beginning of the week.

As he walked out of the dugout he asked me “Did you hear that Hunter Cloud?”

Yes, coach I did, and it’s been on my mind all week as a matter of fact. It was unclear at the moment what he meant and when I asked if he was referring to the umpiring, he said, “That’s for you to figure out.”

Maybe he was actually talking about the umpiring. There were some questionable close calls made against both teams in the game. Perhaps, he was telling his players to not let the umpiring of a game get between them and winning the game.

Another thought crossed my mind: What if he was talking about a more personal battle, a battle within you.

There will always be a voice in your head whispering words of discouragement and sowing seeds of doubt. When this happens, you are faced with two options, to give in or to keep going.

In cross-country, I learned mantras to combat this. One of them was the phrase “feel nothing, is nothing.” I used it to psych myself up and to overcome any soreness I felt. It must have worked because I finished every race I started.

I’m not exactly sure to whom coach Winston was referring to: but I do know one thing. We all have an obstacle we face each day. You should not think about what the obstacle will be. You should rather think about how you will handle it.

When adversity comes, you have to tackle it, attack it and overcome it. Coaches teach kids about sports, but a good coach teaches them life lessons. I’ve seen and heard coach Winston and others do so. 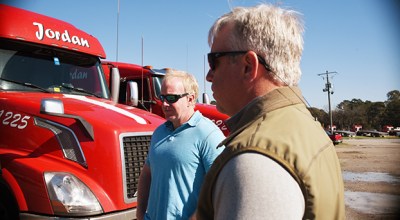