Natchez hosts Ridgeland Wednesday to warm up for playoffs 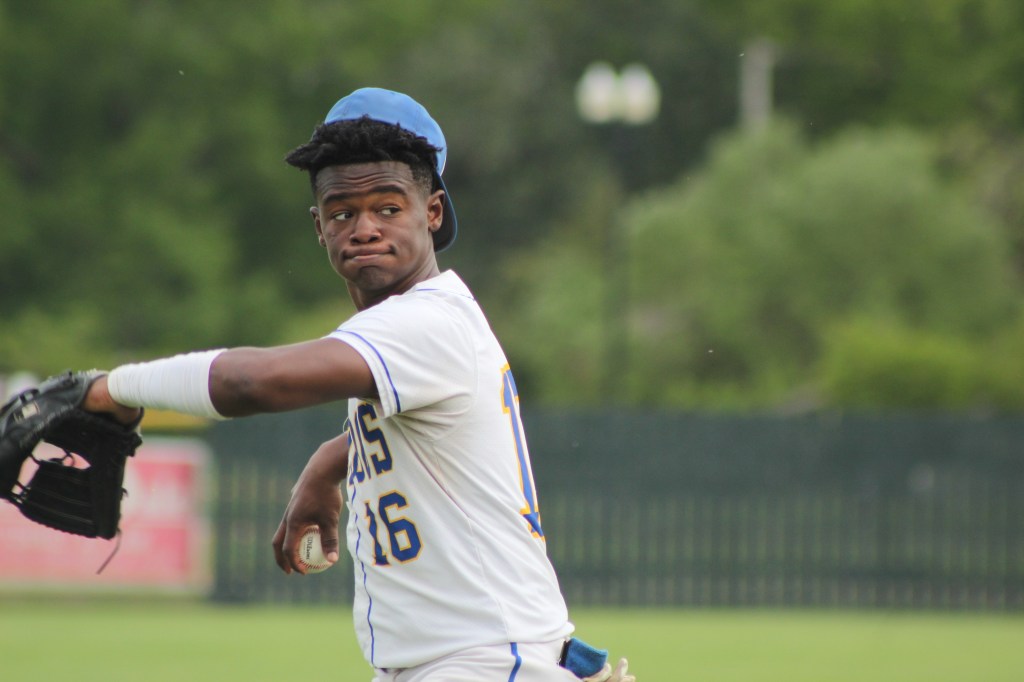 Trevon Henry warms up before a game against Franklin County on April 15. The Bulldogs are playing Ridgeland this Wednesday to warm up for the playoffs. (Hunter Cloud The Natchez Democrat)

NATCHEZ — By virtue of winning the MHSAA Region 6-5A championship, the Natchez High School Bulldogs received a first-round bye in the Class 5A South State Playoffs and will not begin postseason play until Thursday, May 6.

That’s when Game 1 of the second round will take place. Natchez High head baseball coach Dan Smith said he wanted to get a game in until then so the Bulldogs won’t have a two-week break between games.

Natchez High will play host to Region 4-5A champion Ridgeland High School Wednesday at 5:30 p.m. at Chester Willis Field. While the Bulldogs enter this game with a 12-8 overall record, the Titans are no slouch themselves with an overall record of 18-10.

“The regular season ended last Thursday. This will be an open round for us,” Smith said.

The game was originally scheduled to take place Thursday afternoon, but the rain in the forecast for both Thursday and Friday, the game was pushed back to Wednesday. And it will also have affect how the Bulldogs will be able get practice in as they get ready for next week.

“We’ll have to be creative and work around the rain. With the rain, it’s hard for us to practice,” Smith said. “We don’t have an indoor facility or covered batting cages, so we have to be creative to get some quality work during bad weather. We’ll do some tennis ball work, go to the weight room and get some weightlifting in. We may watch some videos of some previous games and see some of the mistakes we made.”

Smith added that the Bulldogs will continue to stay focused not only during practice, but come game time next Thursday.

“It’s hard to keep focus. They’re dedicated kids. That’s the way I coach and I instill that in the kids,” Smith said. “They might be a little rusty. I have a 100 percent trust in them that they will be focused next Thursday. They know the stakes. They’ll be ready.”

Smith said this will also be a week for the Bulldogs to recover from any aches and pains they had during the regular season.

As for who Natchez High will play in the second round will be determined later this week when Round 1 begins. Smith said the Bulldogs will play the winner of the series between Region 5 No. 2 seed South Jones High School and the Region 8 No. 3 seed, which will be either Pascagoula High School or Wayne County High School.