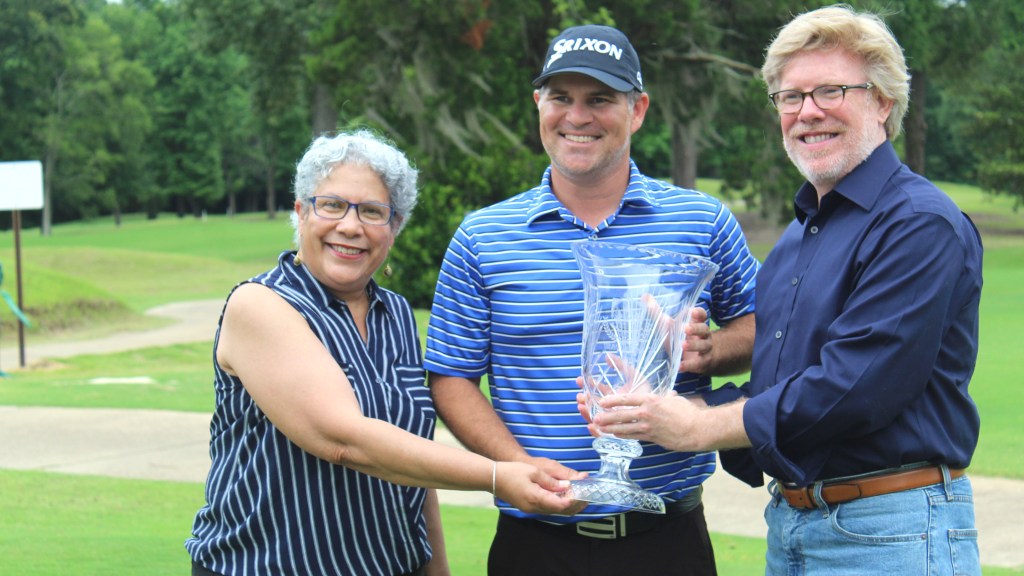 At left, Alderwoman Valencia Hall, professional golfer Michael Arnaud and Natchez Mayor Dan Gibson hold the trophy for the Natchez Open. Arnaud shot 19 under to win the tournament by four strokes. The Natchez Open was held by Greg Brooking and the Duncan Park Golf Course. (Hunter Cloud The Natchez Democrat)

Michael Arnaud drove his golf ball down the last fairway of the Natchez Open with one hand already on the championship. His ball settled onto the green leaving him close to a 20-foot putt which he nearly made for eagle.

His eagle putt rolled just shy of the hole and he had a short tap-in for birdie and a 19 under par win. Carding a 65, 63, 66, the Covington, Louisiana native finished atop the leaderboard with a four-stroke advantage.

“I did not know where the ball went. I kind of pulled the tee shot a little bit,” Arnaud said. “It missed the tree right there off of the tee and I was just hoping it got a good lie down there. I was hoping it did not hit anything solid. When I got up there they told me it got on the green which was kind of a shocker. I wanted to get to 20-under par but I’ll settle for the win.”

Arnaud currently plays on the Korn Ferry Tour. He said he needed to play well in the last three events to have a shot at earning his PGA Tour card. Arnaud came close to making the PGA tour a few years ago, he said. His performance at Duncan Park was solid and mostly mistake-free, he said.

The Korn Ferry tour and the European tours are the second-best tours of golf below the PGA. Last week, Arnaud was playing in a tournament in Chicago and he had planned to play in a tournament in Raleigh, North Carolina but he missed out on qualifying for the tournament there so he signed up for the Natchez Open.

“It was a great decision to come out here for me. I played solid and played well,” Arnaud said. “This course is fun, it is very getable. I took advantage of some of the holes I was able to be aggressive on. I just did not make a whole lot of mistakes. Friday was the first day I saw the course.”