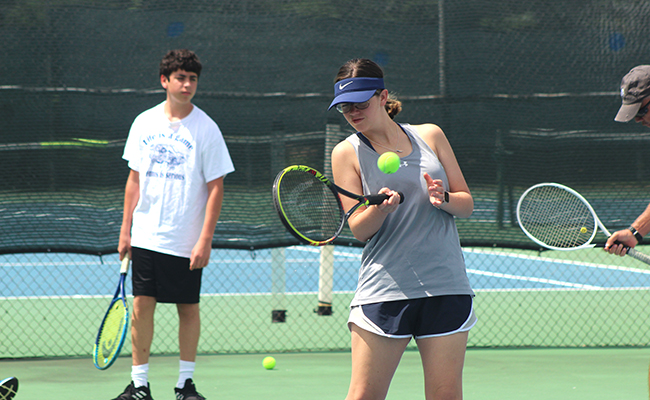 Peyton Akins returns a serve in the Youth Tennis Camp on Wednesday at Duncan Park. (Hunter Cloud The Natchez Democrat)

Tennis balls hit by players whizzed inches from Trickey’s face. Duncan Park Tennis Director Frankie Spence instructed kids on the proper form for hitting a front hand or backhand. One ball hit the cart of balls Trickey had and it ricochet into the air. He said he never saw it.

“I’m helping Frankie this summer. I’ve coached before and played a lot of tennis at Louisiana College,” Trickey said. “I think it’s going to be a good summer. We are just going to lead the excitement for tennis here into a full year of tennis for these kids.”

About 25 kids in grade school ran around the court as they played ghosts and goblins. A game Spence came up with to teach kids how to keep the ball inside the court.

Tennis player Bryanna Smith kept the ball in play for a pretty long time, and she only became a “ghost” when another player caught her ball. When the older kids started their camp drills, Spence tried a new game to teach the players.

He got the players like Peyton Akins to hit the ball higher over the net by having them hit over the fence, separating courts. Players still had to control the ball by hitting a target area with the ball.

Akins said she is trying to get better at tennis. She started playing tennis in 8th grade and will be going into 9th grade. She said she enjoys the competition of tennis and the fun of the game. The camp’s coach is what got her to come from Vidalia to practice tennis at Duncan Park.

“Mr. Frankie has taught me enough before. He is one of the best tennis coaches I’ve ever had,” Akins said. “He knows how to have fun while teaching us how to play. He teases us about something’s that we do, and it helps. It makes us realize what we are doing wrong and helps us get better. He is just really nice and funny.”

ACCS Cheerleader Karly King to cheer at the University…