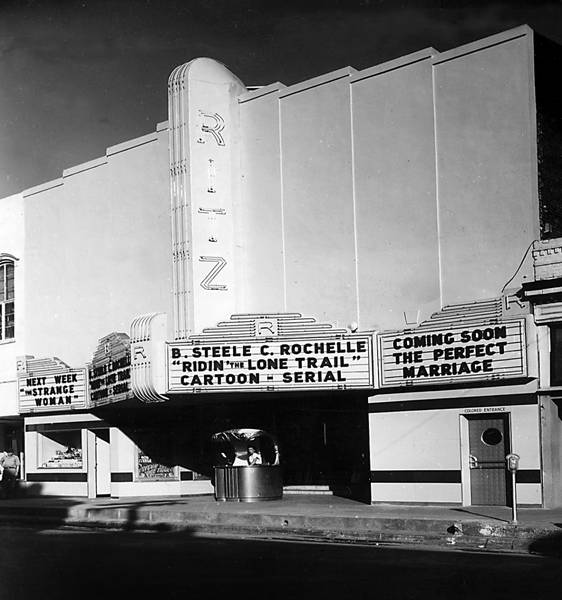 A photograph of the Ritz Theater shows the marquee and canopy, which the building still has today. The Historic Natchez Foundation, which owns the building, has found developers who plan to restore the building and put it to use.

NATCHEZ — The Historic Natchez Foundation announced this week that the former Ritz Theater on Commerce Street has new owners who plan to restore the building and put it to use.

The Ritz, built in 1935, ceased to operate as a movie theater approximately 50 years ago and was used only for storage until about 2000 when the entire roof structure collapsed, HNF said.

When neighboring property owners began to complain about the condition of the building and its threat to adjacent historic properties, the City of Natchez demanded that the owners repair or demolish the property. In December 2002, David Paradise and Burk Baker succeeded in purchasing The Ritz and immediately donated it to the Historic Natchez Foundation for preservation.
On Tuesday, HNF transferred ownership to Franklin Commerce, L.L.C., whose managing partners are Steve Campo and Mamie Henry plan to restore its Art Deco style façade, famous for its projecting trapezoidal marquee with “Ritz” emblazoned in lights.

Campo and Henry are originally from New Orleans and are now living in Covington, Louisiana, with plans to locate permanently to Natchez. They plan to fix up and open the interior of the Ritz as a food market for starting-up businesses to have point of sale without relying on pop-up markets or brick and mortar.

“This project is a win, win for everybody and will bring back the life of the arts district,” Campo said.

Henry said the wide-open space could hold approximately 14 different vendors of food and gift shop items. Without a roof, the building has fallen into disrepair and will take time to fix up. Their goal is to open in 2023, Henry said.

“Bringing it back to a theater is not the best thing for the community and is not cost-effective,” Henry said. “Even though we’re newcomers, we’ve been watching and listening to tourists and came up with what we think is the best use for the space.”

In order to preserve the grandeur of the theater, Henry said the Art Deco style would be kept and the lights on the sign replaced with similar style LEDs. Elements of the original theater, such as seats and the ticket booth, would be kept in the lobby as museum pieces, she said.

Movie screens would show films constantly with speakers with volume controls on tables where people sit, eat and socialize, Henry said. The space would also welcome families with interactive activities for children, she said.

The preliminary plan is to have the space open seven days a week with at least some of the hosted businesses open during the evening to add a nightlife element to the downtown Natchez art district. Henry said they would look for businesses from all across the Miss-Lou region to participate in the project as the plans for the Ritz begin to take shape.

Historic Natchez Foundation has worked over 18 years to restore and maintain the building’s integrity. Officials said they are glad to finally see it be put to use.

“HNF nursed the ruins of The Ritz for over 18 years and never lost hope that our city’s grandest example of Art Deco architecture would one day be restored,” said Carter Burns, HNF executive director. “We long ago accepted the reality that we would have to give it away to ensure its preservation.  This lengthy process is certainly not new to HNF, which owned and nursed Memorial Hall for almost 17 years before it was rehabilitated as a United States Courthouse.”

HNF President Mac Hazlip said the proposal for the Ritz is also timely.

“We were on the verge of having to undertake major restoration work on the Ritz without a plan for the building’s use and at a time when we are still financially recovering from our investment in the preservation of the fire-damaged Prentiss Club,” Hazlip said. “HNF is excited about the future of The Ritz, and we look forward to working with the new owners.”