The Dart: Georgia native waits with boat while work is done to Mississippi River Bridge 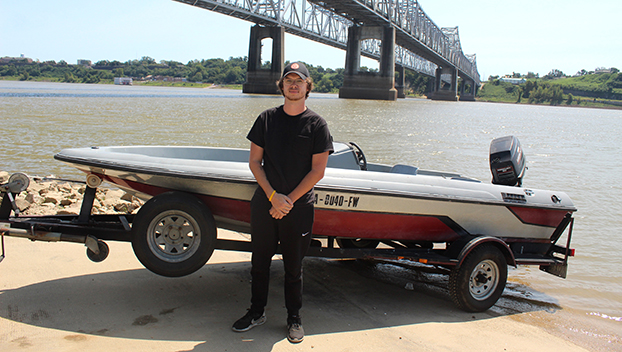 VIDALIA — As lineman and engineers worked on the Mississippi River Bridge, Derek Massey sat in his truck on the boat ramp. A silver bass fishing boat was behind him to launch into the water at a moment’s notice, close to where The Dart landed Friday.

He said his uncle asked him to work with the crew that inspects the bridge for any rust. Earlier this week, he was in one of the crash trucks to ensure no one hit the bucket trucks as they worked.

“It’s pretty chill. I’m sitting down here in the truck,” Massey said. “You don’t expect anybody to fall in. If they do, I’ll be ready.”

A native of Jesup, Georgia, Massey travels with his uncle from time to time. He said his hometown reminds him of Natchez. They are small towns with about 10,000 to 15,000 people in counties with around 30 thousand residents.

Vidalia, Georgia, is about an hour away from his home in Jesup, he said. When he started working on Friday, he jokingly called his mom to tell her he was in Vidalia before clarifying he was in Louisiana.

Traveling with his uncle, he has worked in New Orleans, Shreveport and Baton Rouge.  During his week in Natchez, he has spent nights trying different restaurants. Pigout Inn and Fat Mama’s Tamales have been his two destinations so far. Natchez Brewing Company is next on the list for its pizza, he said.

“I take the opportunity to work with my uncle to get out of my small town and eat different food,” Massey said. “I like to see different places.”

A few times, he had the opportunity to travel with his uncle in a semi-truck driving across the country. It has opened up the door to another career path, one worth considering, he said.

The 26-year-old said he tried out college for a year and had wanted to be a nurse. Working in the ER changed his mind after seeing everything they had to deal with.

“I don’t want to have that responsibility for someone else’s life,” Massey said. “I plan on going back and maybe becoming a psychologist. I like talking to people about their feelings.”

In his free time, Massey said he enjoys playing basketball or golf. Occasionally, he will play video games. As he matures, he said he grew closer to his family. He enjoys spending more time with his little nieces and nephews.

Looking back on 20 year since 9/11, he said it is crazy how much time has gone by. He would have been about six years old when the attacks happened.

“I was in class but I don’t remember them putting it on tv or anything,” Massey said. “I like how every year it brings us together. I like how it brought the country together that day. 9/11 erases color, religion and everything by uniting us.”