Vikings must be physical against Dragons 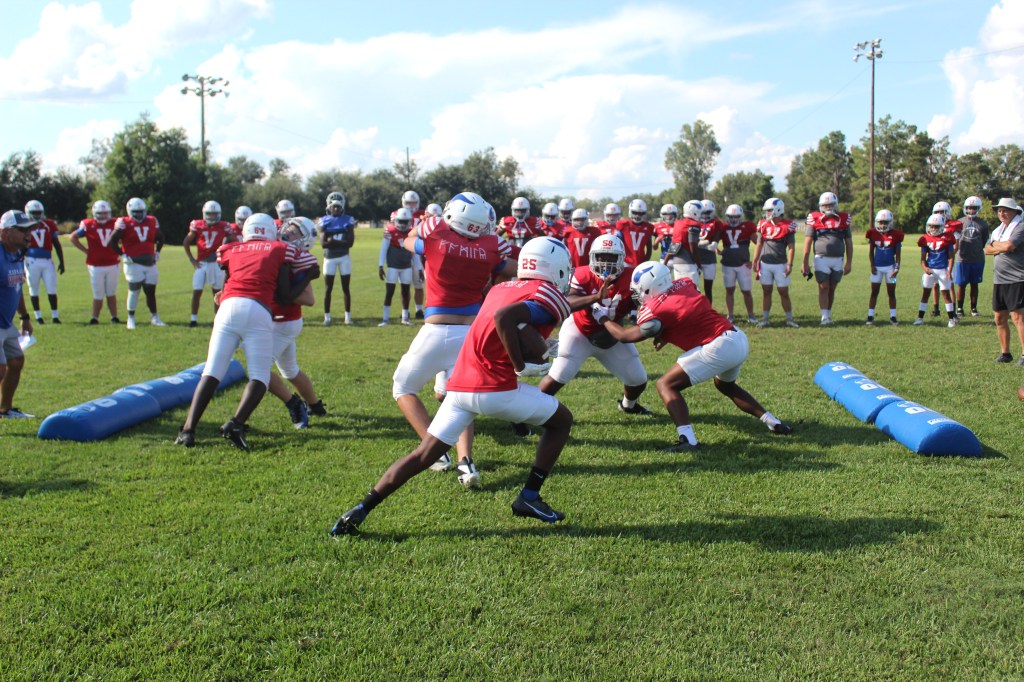 Vidalia runs through their drill called Pride Alley where players battle within the confines of four yards. Head coach Mike Norris said his team needs to be more physical and aggressive this week against Mangham. (Hunter Cloud | The Natchez Democrat)

VIDALIA — Following a 48-0 loss to General Trass, Vidalia (1-4) will look to bounce back against Mangham (4-1) this Friday. The Dragons are the 6th best team in Louisiana Class 2A and are averaging 30.6 points per game.

Last week, the Dragons beat Ferriday 36-0 to extend their three game win streak. Vidalia will have to get out of their own way to win Friday night, head coach Mike Norris said.

“Sooner or later we have to be physical and aggressive,” Norris said. “We have to defend aggressively and attack on offense. Right now, those concepts are escaping us. Our biggest foe right now is us.”

The Vikings are trying different drills to bring out the physicality.

Vidalia opened its practice Tuesday with a drill they call “Pride Alley.” There are three offensive linemen, a running back, three defensive linemen and a linebacker. They have four yards to win the line of scrimmage.

“It is all about playing for pride,” Norris said. “Hopefully it will get the energy and excitement up. It is a long season.”

Vidalia needs to stay disciplined and execute to snap a four game losing streak Friday night. Offensively, they average 10 points per game and are giving up 21.2 points per game on defense.

“The last few games we shot ourselves in the foot so much we had to reload,” Norris said. “We just need to play Viking football and give perfect effort.

Vidalia will take the field on the road against Mangham Friday night at 7 p.m.