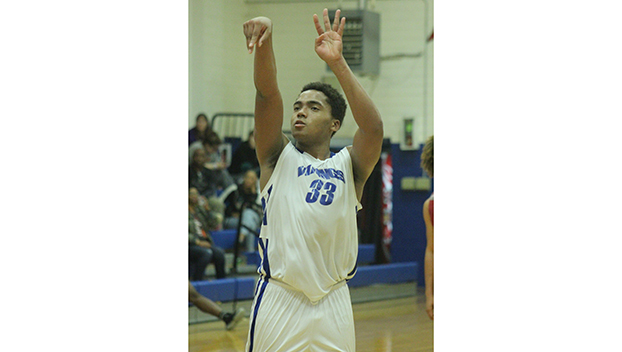 Trenton Davis led Vidalia with 12 points in their 45-42 win over Mangham. (File Photo | The Natchez Democrat)

VIDALIA — Louis Jordan may have scored just six points for Vidalia High School’s varsity basketball team in last Friday night’s key LHSAA District 2-2A game against Mangham High School, but his defense against Dragons point guard Jalen Williams in the second half more than made up for it.

After Williams scored all of Mangham’s 15 first-half points, Jordan shut him down after halftime – especially in the third quarter – as Vidalia hung on for a 45-42 win over the Dragons to keep its postseason hopes alive.

“It was a tough defensive struggle for both teams,” Vikings head coach Damus Smith said. “We got up as much as 10 points. They got a seven-point lead on us. The game went down to the wire.”

With time running out and Vidalia leading 43-42, Mark Perkins stole the ball and passed it to Trenton Davis, whose lay-up with three seconds left gave the Vikings a three-point lead. Mangham was not able to get off a shot before time expired.

Davis led the Vikings with 12 points while Chris Brooks had 11 points and Sema’J Hayes chipped in with nine points. But it was Jordan’s defense on Williams after halftime that allowed Vidalia to pull out the win.

Smith said he normally has Jordan defending the opposing team’s best player, adding, “He hasn’t let us down yet.”

The first quarter ended with Vidalia holding a slim 12-11 lead over Mangham. Both teams struggled to get anything to fall through the basket in a low-scoring second quarter. The Vikings took a 16-15 lead into halftime before they outscored the Dragons 13-6 in the third quarter.

“We shut them down the third quarter. (Jordan) shut (Williams) and took the game out of his hands. He scored just two points in the third quarter,” Smith said. “The fourth quarter they had 22 free-throw attempts and made just seven of them. They had 29 attempts for the game.”

Seven of Williams’ nine points after halftime came at the charity stripe. He ended up with a game-high 24 points.

Smith said this was a huge win for Vidalia (8-13, 2-4), which sits as the No. 35 spot in the Class 2A power ratings. The Vikings played at Rayville High School in their District 2-2A finale at 7;30 p.m. Tuesday and have three non-district games after that — home vs. Madison Parish High School (Sweetheart Game) this Friday, home vs. West Feliciana High School on Tuesday, Feb. 15 (Senior Night), and at Jena High School on Friday, Feb. 18.

“Of these four games left, we have to win two of them. It think we can do it,” Smith said. “This is our playoffs right here.”

VIDALIA — The Vidaiia High School Lady Vikings were shut by Manghan High School not just one in quarter but in two quarters as the Lady Dragons cruised to a 55-4 victory last Friday night in LHSAA District 2-2A action.

Mangham jumped out to a 20-0 lead over Vidalia at the end of the first quarter. The Lady Dragons then took a 35-2 lead into halftime before outscoring the Lady Vikings 16-0 in the third quarter for a 51-2 lead.

“Like I said before, they don’t care about losing. They just want to play,” Lady Vikings head coach Tema Larry said.

The Lady Vikings (0-18, 0-6) played at Rayville High School in their district and regular-season finale at 6 p.m. Tuesday.