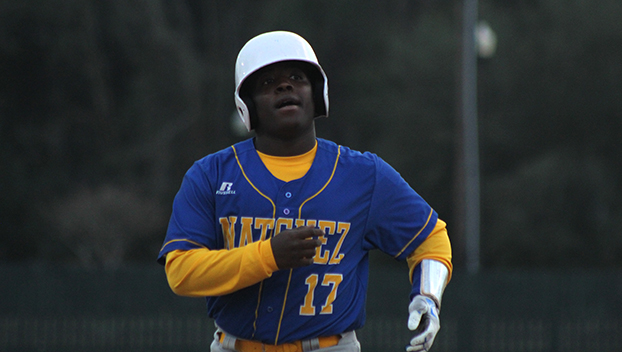 BROOKHAVEN — On a cold and cloudy Saturday afternoon, about the only thing that was hot between Natchez High School and Enterprise Attendance Center was the Yellow Jackets’ bats as they pounded out 14 hits and a 7-5 win over the Bulldogs.

After Natchez High failed to score a run in the top of the seventh inning to keep the game tied at 5-5, Enterprise scored two runs off losing pitcher Jaleel Adams in the bottom of the seventh. Adams came on in relief of starting pitcher Jwun Mackey, who gave up five runs, four of them earned, on 12 hits and two walks while striking out seven batters in five and two-thirds innings.

Despite the loss, Bulldogs head coach Dan Smith said he felt like his team had a chance to win the game even though they got out-hit by the Yellow Jackets 14 to five and committed three errors.

“We played a pretty good game. Our pitchers didn’t throw many strikes. But we fought through and kept fighting,” Smith said. “In high school, walks are how you get hurt. Overall, we played pretty good. As long as they continue to get better by the day and by the game, I’m satisfied with that.”

Adams allowed two earned runs on two hits, walked two and hit one batter in two-thirds of an inning.

“The kids are having fun. There’s no pressure on them. That’s what I’m excited about more than anything,” Smith said.

As for being limited to just five hits, Smith said, “We didn’t hit the ball that well. But that’s baseball. Their pitcher, he threw pretty good. But we should have won that game.”

The starting pitcher Smith was referring to was Matthew Burns, who allowed four runs, all of them earned, on three hits, struck out 10 and walked four. Wyatt Garrett picked up the win in relief as he gave up just one earned run on two hits, struck out four, and walked only one in two and one-third innings.

Mackey had three of the Bulldogs’ five hits, going 3-for-4 with two runs batted in. Traylon Minor was 1-for-3, was hit by a pitch, and scored two runs while Mason Bouldin was 1-for-3.

The game was scoreless through two innings before Natchez High scored one run in the top of the third inning. But Enterprise answered with one run of its own in the bottom of the third. And that seemed to be the theme of this game — every time the Bulldogs would take the lead, the Yellow Jackets responded.

Even with the game being a back-and-forth battle, Smith said his players were not the least bit tight or nervous.

“We need to cut down on our walks. I emphasize pitching and defense,” Smith said. “If we cut down on walks and errors, we could have won the game. Mostly the walks. We were up 4-1. If we throw strikes and play defense, we win the game.”