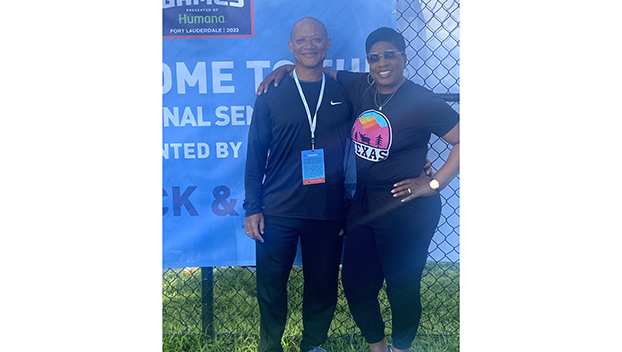 Raymond Cage and his wife Angela Cage at the National Senior Olympic Games in Fort Lauderdale, Florida. Raymond set personal bests in the 50m and 100m dash and placed top eight in the country. His wife is his coach and trainer. (Submitted Photo)

FORT LAUDERDALE, FLA. — Former Vidalia football player and track runner Raymond Cage went to the National Senior Olympics this weekend. He finished sixth in the 50m dash and fifth in the 100m dash in the 50-54-year-old age group.

The winner in the 100m dash Ronald Gartin of Arkansas finished with a time of 12.42 seconds. Cage set a personal record with 12.54 seconds to finish fifth.

His wife Angela told him it was a great accomplishment to have the sixth and fifth fastest time in the nation.

This season was the Dallas resident’s first year to run competitively since high school. She helped coach and train him for the event.

“It was a humbling experience. It was exciting to run against top competition and make it through two heats into the final eight,” Cage said. “It was a great experience. It felt like an olympic style event. You are there representing your state. It was very inspiring.”

Qualifications for the 2023 National Senior Olympic games, held in Pittsburg, Pennsylvania, have already begun. Cage took first in the Mississippi state meet in the 50 and 100m race and first in the Texas 100m race to qualify. Additionally, he said a top eight finish at nationals automatically qualified him for nationals.

After some rest, Cage sets his sights on the next goal of meddling and maybe winning next year. He will build leg strength to increase spring and speed in his legs. While he is qualified for the 2023 nationals meet, he plans to run in a few races to stay in competition shape.

A close finish kept him from the medal podium, but it gave him motivation moving forward.

“I didn’t leave anything on the field. I gave it my all. I’m staying positive,” Cage said. “I have the fifth fastest time in my age category for my first year. It gives me strong motivation. I hope to take the extra step.”